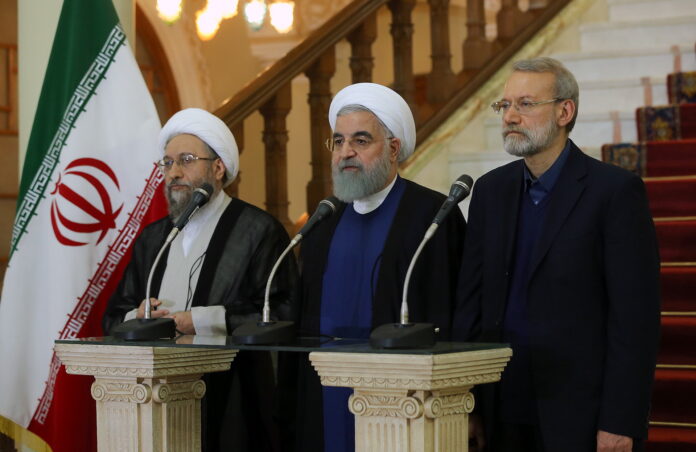 Following the Monday meeting, President Rouhani said one of the issues discussed was the US plots. He said the main conspiracy of the United States is to cast doubt on the future of Iran’s economy, especially among people.
“On behalf of the three branches of power, I thank the great people of Iran who, as always, stood against this conspiracy,” the president noted.
He further mentioned that different scenarios have been discussed at this meeting and the coordination is ensured for the future.
Regarding economic issues, President Rouhani said, “We decided to do something about the domestic problems so that people would feel completely safe.”
It was also stressed that full security has to be provided for people to invest, he added.
Rouhani also noted that a mechanism has been suggested for better attracting of investments, especially the investments of Iranians living abroad.
“In our region, the global arrogance has always been seeking to create insecurity and instability and cause disagreements between countries, but we believe regional issues should be resolved by the regional countries themselves and in coordination with them because there exists a mechanism for that.”
The president stated that the global arrogant is doing its best to expand terrorism in the region saying that “today, God willing, these regional issues are being resolved gradually, and I hope the countries of the region will be able to get rid of terrorism in the near future. I hope terrorism would be wiped out in our region, and the global arrogance never achieves its goals.”
Rouhani went on to say that the global arrogance was after changing the geographical boundaries of the region, but they could not achieve any success.
“The global arrogance continues its efforts to create disagreements in the region with the aim of selling arms. We need to find a solution to the differences that exist in the region. Massacres and bombardments in the region must be stopped. We discussed this issue at the meeting and the necessary steps will be taken.”
Rouhani further mentioned that it was decided to hold the joint meeting of Iran’s trio branches of power at more regular and shorter intervals.
“I believe that if all the branches of power are united under the supervision of the Leader of the Islamic Revolution, the country can go along the path of progress. Of course, the cooperation, consultation and coordination between Iran’s three branches of power is very influential,” said Rouhani.
The joint meeting of heads of three Iranian branches of power was held at Iran’s Parliament building.