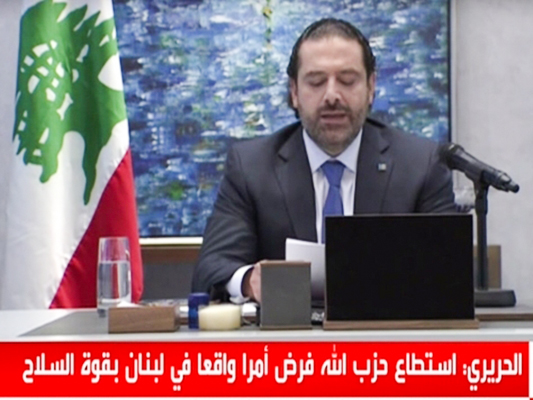 A body language expert says former Lebanese Prime Minister Saad Hariri was visibly in distress throughout a video reading out his resignation letter.

Nazar Nasrallah, a body language expert, says a review of Hariri’s body language during his resignation video broadcasted by Al-Arabiya TV channel reveals he was under a huge psychological pressure.

Nasrallah referred to the black and blue wrist watch that Hariri usually wears on his left hand and said the absence of the watch was visible during the video.

“The watch may have been taken from him so that he couldn’t make any contact with others because as we know, he usually wears the watch in all his formal and informal meetings.”

According to a Farsi report by ISNA, the expert also pointed to the forward-leaning shoulders of Hariri throughout the video and said human’s shoulders usually lean forward when we are under pressure. This shows that Hariri was not comfortable while reading his resignation letter.

“The issue becomes more important as we remember that Hariri is a veteran politician who has undergone various training courses to deliver speech. But his physical status during the video reminds us of his early days in office when he was politically naive and didn’t know how to present himself to the media.”

He also referred to the eyes of Hariri and said throughout the video, Hariri constantly keeps his eyes open and “it seems he has no control over his eyes.”

According to Nasrallah, this shows either Hariri is lying or is under pressure to lie because the status of his eyes is unprecedented during his speeches.

“Throughout the video, Hariri repeatedly pushed forward his tongue. This shows that he suffered from a dry mouth, another sign of distress and his high internal tension. This comes as he had a glass of water near his hand. Meanwhile, he never opened his mouth fully to utter the words. His voice is low without any sign of confidence. Having finished reading out the resignation letter, he leaves the papers at his hand on the table, a psychological sign that he just wanted to get rid of the condition. It seems the words and sentences were dictated to him and he was threatened,” he added.

According to Nasrallah, Hariri used short sentences instead of long ones in his resignation letter and this is another sign of his distress throughout the video.