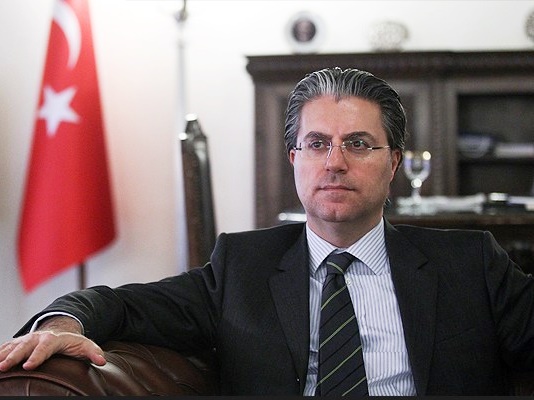 Turkish ambassador to Tehran has criticized the approach Saudi Arabia and a number of its Arab allies have adopted towards Qatar, saying the only way to handle the ongoing crisis in the Persian Gulf region is engaging in a meaningful dialogue rather than giving ultimatums.

In an exclusive interview with the Etemad daily newspaper, Turkey’s Ambassador to Tehran Reza Hakan Tekin has discussed a range of issues including Ankara’s role in the ongoing crises in the region and the relations between Iran and Turkey.

The Turkish ambassador gave the interview to Etemad’s Sara Massoumi on July 23. What follows is the first part of his remarks:

President Erdogan recently visited Saudi Arabia and Qatar. The Qatari crisis escalates every day and none of the sides seems willing to accept conditions set by the other. Turkey insists on having deep ties with Saudi Arabia but it seems to be more strongly siding with Doha. Where does Turkey stand in the crisis?

As you said, we do have very close relations with all countries who are party to this dispute, especially Saudi Arabia and Qatar but I cannot say that we are taking sides in this conflict. But we are not happy the way it has evolved, I mean, how it has erupted. Any country may have some concerns about other countries’ policies, some steps they take, but the way to overcome those differences is not suddenly one day taking up a stance and putting on ultimatum like demands to the other country without engaging in a meaningful dialogue. Actually this was what we were not happy with. Furthermore, these are a group of countries which have very close relations, contacts among themselves, I mean through the [P]GCC. Yes, they did have similar problems in the recent past, but still this is not the way to solve problems. That’s why while not taking sides, we were not agreeing with the approach of the other parties against Qatar.

And we wanted to contribute to overcoming this problem. As you know, within the [P]GCC a reconciliation effort was spearheaded by Kuwait. We may not have much progress in our efforts at this point, but we still hope that we can resolve this problem. Our president visited Saudi Arabia, Kuwait and Doha. So at the highest level we will see where we stand and what we can do to resolve it. Because we already have a lot of problems in our region and we don’t need another tension. So these are the parameters of our approach to this problem.

Do you think Turkey is in a position to play a positive mediation role in this conflict?

Absolutely. We hope so. But of course we cannot be sure about the outcome as it’s not solely in our power to do that. These are sovereign countries and they have to make their own decisions for themselves. We can only facilitate the process, contribute to any existing process or to start a new process in terms of achieving a meaningful result. So that is our main aim. President Erdogan is a respected statesman by both parties, especially by Saudi Arabia. He has very close personal relationship both with the king of Saudi Arabia and also with the ruling family of Qatar. So let’s hope that we will achieve something. Although it is not easy; we are not naïve, we understand the challenges, complexities of the existing situation. But we believe that we cannot sit idle, we have to make some efforts.

Saudi Arabia has demanded that Qatar downgrade its ties with Tehran. How does Turkey view such preconditions for ties between countries in the region?

Of course, we stick to the principal rule of international law. Every country has its sovereign right to develop its relationships with other countries. Hence you cannot impose on any other country to control, or either upgrade or downgrade your relationship with a certain country or a group of countries. We don’t believe that is a right approach. So we don’t agree with that approach and traditionally as you know our policy, especially vis-à-vis Iran, has always been for engagement. Even though when we do not agree with Iran on many issues, on regional issues, we have never pursued a policy of isolating Iran. This is not right. And in addition to that of course, when you see some of those countries in that group having quite extensive relations with Iran, it doesn’t also make sense to ask for another country to downgrade their relations with Iran.

At the beginning of Bahrain crisis when Saudi Arabia had sent troops to Manama, Erdogan made a very strong statement by saying we do not want another Karbala. This is a very important statement by a Sunni-majority country’s leader drawing parallels with Karbala in Bahrain.

In recent days, we have seen a downgrade in Iran-Kuwait ties and there is some analysis about Saudi Arabia’s role in this new crisis. How do you see Saudi Arabia’s recruiting allies against Iran?

I’m not sure if that is the real reason. I mean, of course, you have to ask that from Kuwaiti or Saudi officials. Kuwait’s position has always been a little bit different, more nuanced, towards Iran within the [P]GCC. I’m sure you are aware of that. Even after this recent crisis, Kuwait did not take a hardline approach to Iran as the others. They were not among those four countries anyway. And as I said earlier, they started a reconciliation process. According to the information I have seen in the press and some other reports, there has been some legal process in Kuwait regarding some terrorist activity in the country and they had some conclusions that these steps had to be taken. So it is their sovereign right to do so. I think it would be a bit of an oversimplification to present the recent decision of Kuwait as ordered by Saudi Arabia or as a result of Saudi pressure on Kuwait. I think it could be more complicated than that.

In recent years, Saudi Arabia has accused Iran of destructive activities in the region. We have heard similar remarks from President Erdogan. Is Turkey siding with Saudi Arabia and the UAE?

We believe Iran is a very important country in the region and it has to have a stake on the affairs of the region. Nobody can ignore Iran. Nobody can say Iran should have no role in our region. This is not a realistic policy, not a right policy and not a legitimate demand. But how that role should be played is another question. Yes, we also do have some concerns about Iran’s policies in the region. We believe Iran should play a more constructive role for strengthening stability in our part of the world. It has influential actors on the ground in several countries in our region. And the perception about Iran’s role in the region is not positive, this is not a secret. So, there are lots of concerns about Iran’s activities in the region and we share some of them. We don’t say all of them are fully right, but there is indeed a point in this approach and we also share those concerns. We say this to our counterparts when we have, even at the highest levels, meetings with Iran that you know this should not be the way it is. But of course those perceptions could be both ways. So we have to make efforts to change this mentality in the region. I mean, if there exists a mistrust on Iran, Iranian leaders and the Iranian government should also think why this is the case, why is there such a perception. You cannot make a conclusion that all of them are just making it up, that because there is a sectarian tension, Iran is Shiite, they are Sunni, so they don’t want Iran to be powerful so that’s why they are exaggerating Iran’s activity and role in the region. This is not the way to deal with it in my opinion. Iran should also think about why this is the case.

Does Turkey have same concerns about Saudi Arabia‘s activities in the region too? Don’t you think closing our eyes on what Saudis do in Yemen and Bahrain couldn’t be the solution anymore?

Every issue has a different background and different context. We are not happy when there is bloodshed, be it in Yemen, or in Bahrain, or in Syria or in Iraq. And the blood spilled or the oppression done is always among Muslims themselves. So we are not happy with that and we want to change this situation. But when you look at the background of all these issues, it is not always black and white, that one party is fully innocent and the other party has the full responsibility of the situation. Reality is always more complicated.

Yes it’s not black and white but president Erdogan criticized Iran so many times but we never heard a word from him about Saudis’ actions in the region, especially in Yemen.

Some things are done in different ways. With any country, when we have concerns, you can do it in different ways. Sometimes, publicly, sometimes privately. You remember when Bahrain crisis was simmering a few years ago, and Saudi Arabia and some other countries had sent troops to Bahrain. At that time Erdogan was Prime Minister and he made a very strong statement. That was at the beginning of the crisis, he said we do not want another Karbala. This is very important, I mean, you would not hear from any Sunni-majority country leader such a statement, drawing parallels with Karbala in Bahrain. So it would be unfair to criticize us that we’re being not objective on these issues. There are some nuances in our reactions, so that is what it is.

You can read the second part of the interview here.