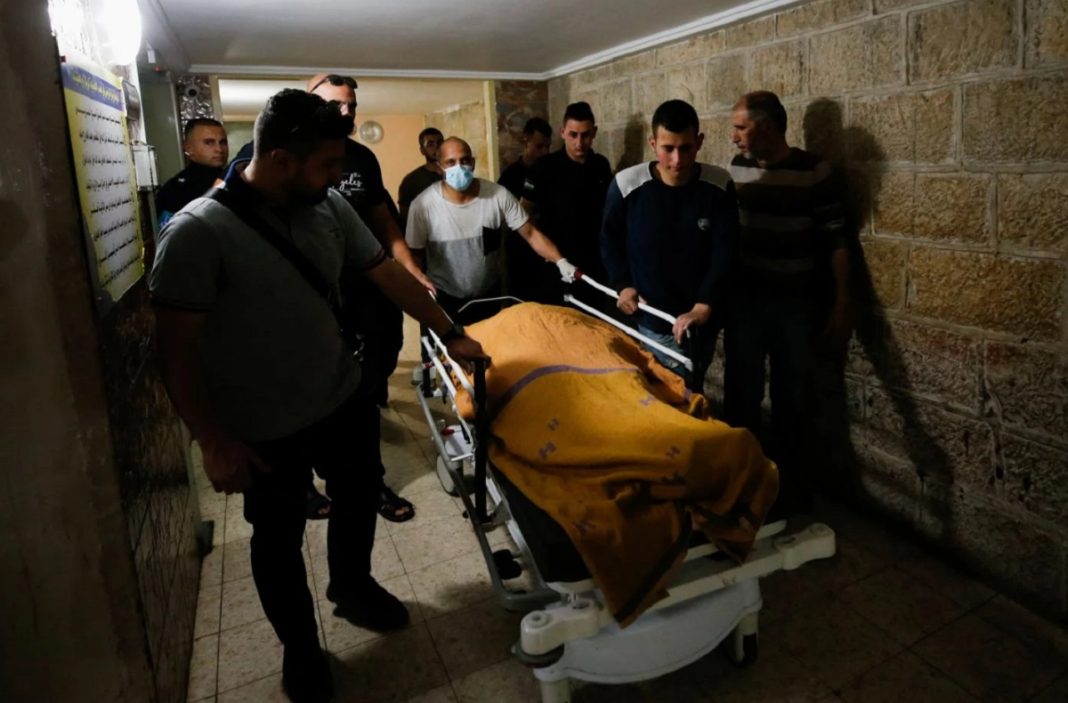 Israeli forces fatally shot a former Palestinian prisoner during a raid in the town of al-Khader, south of the occupied West Bank city of Bethlehem, local sources reported.

Identified as 21-year-old Mohammad Ali Ghoneim, the young man was shot in the back near his home during an Israeli military raid in al-Khader, local sources said.

The bullet reportedly exited his chest.

Ghoneim was evacuated to Al-Yamama Hospital in al-Khader where he succumbed to his wounds.

An Israeli military spokesperson alleged that troops opened fire after Ghoneim was seen hurling a Molotov cocktail toward an Israeli vehicle.

Aridi died in a hospital in the nearby town of Beit Jala after suffering massive blood loss from a torn artery.

The Israeli army claimed soldiers fired warning shots into the air when the woman approached them before they “fired towards the suspect’s lower body”. No weapon was found on her person, according to Israeli newspaper Haaretz.

The army added it was investigating the incident.

Twenty-four-year-old Maha al-Zaatari was shot hours later in Hebron, after allegedly stabbing an Israeli border police officer at one of the checkpoints in the town’s old city with a kitchen knife, lightly wounding the officer.

An Israeli police spokesperson confirmed that the woman had been “neutralised” near an Israeli military checkpoint.

The shootings are the latest in a tense three-week period in which 14 Israelis have been killed in attacks carried out by Palestinians from the occupied West Bank and inside Israel.

At least 13 Palestinians have been killed by Israeli fire in the same period in the West Bank, including one shot by a settler.

Meanwhile, Israeli Prime Minister Naftali Bennett has warned that “the State of Israel has gone on the offensive”.

As Bennett has vowed to “settle accounts with everyone who was linked, either directly or indirectly, to the attacks”, Palestinian officials warn against further escalations.

Israeli forces have launched a particularly intense crackdown on the northern occupied West Bank city of Jenin in recent days, after a gunman from the town opened fire in a Tel Aviv nightlife area on Thursday, killing three Israelis and wounding more than a dozen others.

Israeli authorities have demanded that Fathi Hazem – the father of the late 28-year-old Tel Aviv shooter – turn himself in, according to Israeli and Palestinian media.

“There are not and will not be limits for this war,” said Bennet of the raids.

“We are granting full freedom of action to the army, the Shin Bet [domestic intelligence agency] and all security forces in order to defeat the terror,” he added.

The Palestinian Authority’s Ministry of Foreign Affairs, in a statement on Sunday, said Bennet’s comments were tantamount to “an okay for the killing of Palestinians”.

“Bennett did not stop at launching the military machine of destruction, but rather went on misleading the world public opinion by stating that the occupying state was moving from a state of self-defense to a state of attack, in a blatant disregard of the fact that Israel is already occupying the land of the State of Palestine,” the ministry added