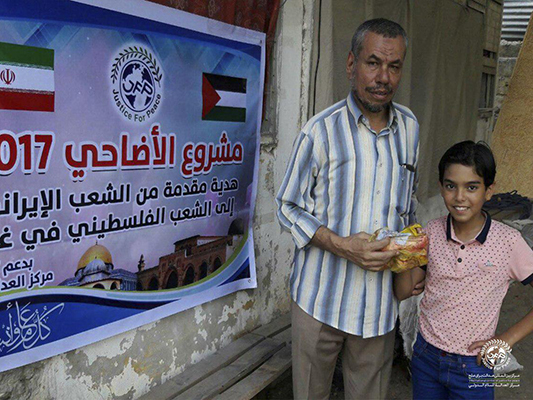 Several packs of sacrificial meat sent by a group of young Iranian volunteers have been distributed among the besieged Palestinians in Gaza Strip as well as the poor people of Yemen’s capital who are under non-stop airstrikes by Saudi Arabia.

According to the public relations of the Iran-based International Centre of Justice for Peace, the distribution was made on the most significant holiday in the Islamic calendar, the Feast of Sacrifice or Eid ul-Adha.

The packs were simultaneously distributed in Gaza and Yemen on the occasion of the Feast of Sacrifice which this year fell on Friday.

The Spokesperson for the non-profit Centre of Justice for Peace, Mohammad Asqari, said the main motive behind this popular move was to express sympathy with the oppressed people of Gaza and Yemen who are suffering under the Israeli and Saudi Arabian suffocating sieges.

He referred to the desperate conditions of people in the Gaza Strip and said Gaza is faced with a humanitarian crisis and the Palestinian Authority, in complicity with the Israeli regime, has put the poor Palestinians in the enclave under a suffocating siege over the past decade.

“Only last month, 5 Palestinian children lost their lives due to lack of medicines caused by the Israeli blockade on Gaza. As a result of the siege, Palestinian patients cannot be transferred to hospitals outside the impoverished enclave,” he said.

Asqari also said more than 60 percent of the Palestinians in the Gaza Strip are in dire need of humanitarian aid.

He then referred to the Yemenis’ sufferings and said more than 7 million innocent people in Yemen are suffering from deadly diseases and lack of food. “This is the most critical humanitarian crisis in the world over the past 90 years,” he concluded.