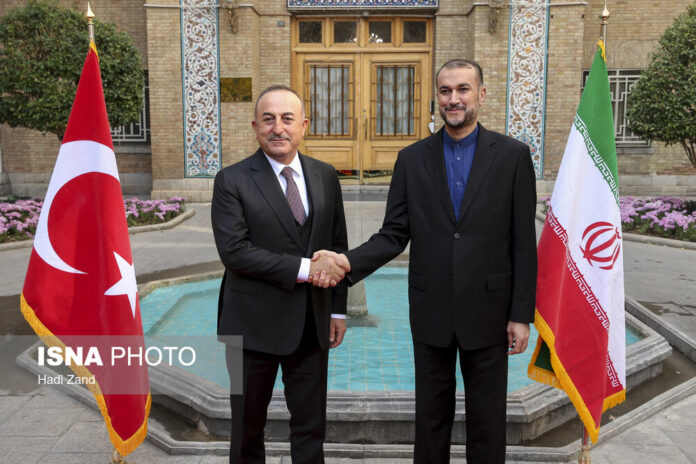 The Turkish foreign minister has voiced his country’s opposition to anti-Iran sanctions saying Ankara encourages Turkish investors and companies to cooperate with Tehran.

Mevlüt Çavuşoglu in a Monday meeting with his Iranian counterpart, Hossein Amir Abdollahian in Tehran, added Turkey has always opposed illegal sanctions against the Islamic Republic of Iran.

During the meeting between top Turkish diplomat Mevlüt Çavuşoglu with Iran’s Foreign Minister Hossein Amir Abdollahian, the most important issues regarding bilateral relations and regional as well as international developments were discussed.

In the meeting, Amir Abdollahian put emphasis on the policy of the Government of the Islamic Republic of Iran to expand relations with its neighbors and Turkey’s important place in this regard. He expressed hope that the Turkish president’s visit to Tehran with the aim of holding the seventh meeting of the Supreme Council of Cooperation between the two countries will happen in the near future.

He described the drawing up of a comprehensive document of cooperation between the two countries as useful. Amir Abdollahian said facilitating trade and investment and developing economic cooperation is of great importance in relations between the two countries. The Iranian foreign minister further underlined the need for the two countries to work towards protecting the environment and managing common water resources. Çavuşoglu also welcomed the views of his Iranian counterpart, saying “Turkey has always opposed illegal sanctions against the Islamic Republic of Iran and we encourage Turkish investors and companies to cooperate with Iran and call for paving the way for bilateral cooperation in this regard”.

The Turkish foreign minister said the finalization of the documents needed for the purpose of developing relations and increasing contacts between the officials of the two countries is necessary for the expansion of ties. He announced Mr. Erdogan’s readiness to visit Iran at the earliest opportunity.

Amir Abdollahian and Çavuşoglu also held talks over other topics including parliamentary and media co-operation, joint efforts to resolve consular and judicial problems, ways of facilitating the two countries’ diplomatic missions, and also the fight against drug trafficking, illegal immigration and terrorism.

The two foreign ministers also exchanged views on the most important regional developments, especially the current situation in Afghanistan and Yemen. They also stressed the need for the two countries to cooperate in order to strengthen stability and security in the region