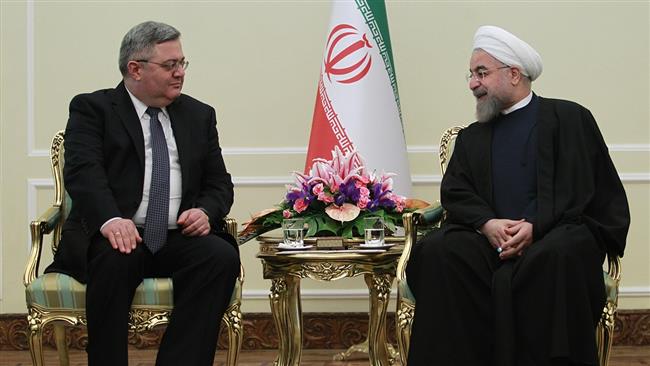 Iran’s President Hassan Rouhani has warned that tensions among neighboring countries will be detrimental to regional stability and security.

“The way to establish peace and stability is that all [countries] should respect each other’s geographical borders and in case of any problem, they should settle it through dialog,” Rouhani said in a meeting with Georgian Parliament Speaker David Usupashvili in Tehran on Sunday.

He called for the expansion of Iran-Georgia ties and said Tehran and Tbilisi must make use of their utmost capacities to improve cooperation.

The Iranian president said the two countries should boost economic cooperation, particularly in the energy sector, adding that Iran can export its gas to Europe through Georgia while the North-South corridor can link Georgia’s ports to the Persian Gulf and the Sea of Oman.

Urging respect for different religions, cultures and thoughts, Iranian president said, “We should all counter extremism, violence and terrorism hand in hand.”

The Georgian parliament speaker pointed to the growing Tehran-Tbilisi relations during the recent years and expressed his country’s determination to further bolster cooperation with Iran in various fields.

Usupashvili said Iran has close ties with regional countries and can play a positive role in establishing peace and stability in the South Caucasus region.