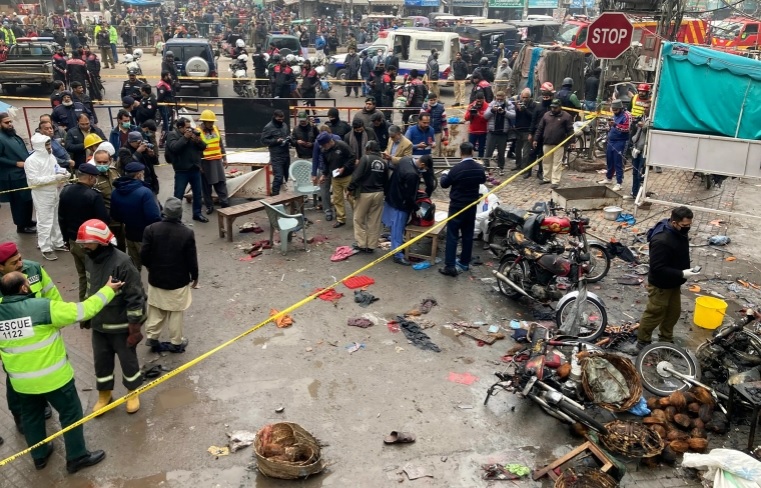 At least three people were killed and several others wounded in an explosion in a busy shopping district in the eastern Pakistani city of Lahore, police say.

At least three people were killed and 20 injured Thursday after a bomb blast rocked a busy shopping market of Lahore, Pakistan police confirmed.

“Initial investigations show that it was a time-controlled device on a motorbike which was the cause of the blast,” Rana Arif, spokesman for Lahore police, told news agency AFP.

The blast that shattered windows of nearby shops and buildings took place at the Paan Mandi in Lahore’s famous Anarkali market, where Indian commodities are sold.

There was no immediate claim of responsibility, but there have been a series of blasts and attacks against police since December, when a truce between the government and Pakistan’s Taliban lapsed.

Tehreek-e-Taliban Pakistan (TTP) — a home-grown movement that shares common roots with the Afghan Taliban — has claimed responsibility for most of those incidents.

“We are ascertaining the nature of blast. Over 20 people have been injured in blast and shifted to hospitals,” Deputy Inspector General Police Operation Dr Mohammad Abid told reporters at the site of the blast.

The Counter Terrorism Department and Bomb Disposal Squad officials have reached the spot and are examining the nature of the blast, he added.

The injured have been shifted to the Mayo Hospital where two succumbed to their injuries, according to the Rescue 1122.

Mayo Hospital medical superintendent Dr Iftikhar said that two persons including a boy succumbed to their wounds. He added the condition of four injured brought to the hospital is critical.

Several motorcycles and vendors’ stalls were also damaged on the blast and Police have cordoned off the area. The whole Anarkali Bazaar has been shut after the blast.