Daughter of Sun, a real gem and an ambassador of health 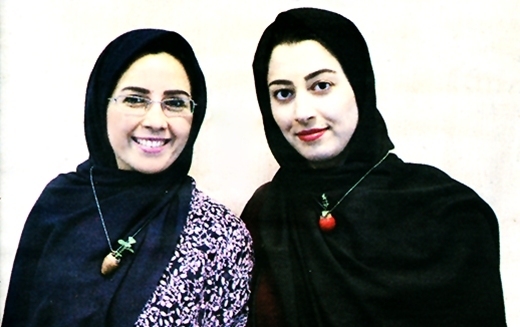 A floral necklace is an ambassador of health to help women who suffer from cancer to learn about ways to come to terms with their disease.

Sometimes a flower makes your day. Now imagine you have it around your neck and feel it every second, with its pure green color constantly before your eyes and its subtle fragrance and sheer beauty staying with you. Small-flower, thumbnail necklaces – which are a family product of the Abedis – make this dream come true.

Soheil, Bahareh and Parisa Abedi have produced these tiny pots to build bridges. The small flowers they have made bear big responsibilities. As the ambassadors of health, they are worn by women around their necks and carry a message of health to all women across the country.

A report by Iranbanou, a supplement of Iran newspaper, tells the story of a family that does handwork to help women with cancer learn about their disease. The following is a partial translation of the report:

My brother was the brains behind this project. He was doing research on cancers that afflict women on personal grounds. Apart from scientific reasons and the growing number of women who suffer from such [incurable] diseases, many women develop the disease due to lack of knowledge. This was a trigger for us to look for a way to raise women’s awareness. At first it seemed to be an easy job, but it turned out to be tough.

After serious, detailed studies, we decided to do an artistic work which can arouse a special feeling and provide – down the road – its target audience with cultural and educational feed. We wanted to make it [the artistic work] serve as an intermediary between us and the target group.

The birth of Daughter of Sun

We wanted to work for women’s health. My brother was thinking about designing a real fresh plant so that women can take it around. His idea ended up in a necklace – comprising of a tiny flowerpot and a flower – which would grow to help create a good feeling. The road ahead was bumpy because hardly can a plant grow in a limited space. We asked a botanical center in the University of Tehran to do research on it and they did it in a few months.

We then started to look for the artists who could make tiny flowerpots. After trying wooden and glass pots, we finally picked pottery flowerpots which represent Iran’s culture and art. The first pot was created eight months after my brother first came up with the idea. We chose Tida, an Avestan name which means the daughter of Sun, for our product. This daughter is expected to link us to the women who know not much about cancer.

It is a family project. We pay for all the costs from our own pockets. The handwork project has not been profitable for us due to high production costs. We sell our works in some bookshops. It is an emotional, not-for-profit job. We want to form a social group; we want to see Tida turn into a name women – in remote towns and villages – who have no access to health information can relate to. Flowers and nature in general can help establish such a contact since they are closer to women’s nature.

The lifetime of the flowerpots depends on how well you take care of them. Wearing these necklaces, you shouldn’t move or walk too much. Give them two drops of water each day; they also need three hours of exposure to direct sunlight. This way they can survive at least three months.

The idea is all Iranian. We want to file a patent for it. We have given Tida as gifts to our friends in other countries. Tida is likely to be copied on the Internet. I hope Iranian officials – for instance, Environment chief Ms. Ebtekar and the Health Minister – will help us.

Tida [which is a women-exclusive item] is also picked by men who want to give it as a gift to their wives or daughters. […] We are happy that Tida has turned into a way to express love for humans.

Now that we’ve left behind tough times, we want to find more ways to contact Iranian women. At first we inked a deal with a charitable organization to dedicate part of our proceeds to the treatment of women who suffer from cancer. […]

Now we seek to do it again to be in contact with women with cancer.