US Strike Followed by New ISIS Push on Palmyra 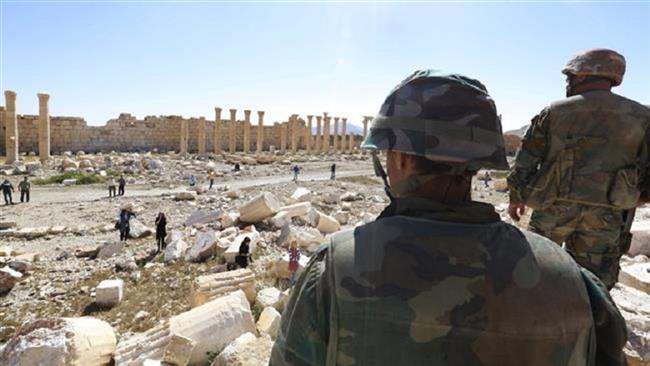 Takfiri ISIS terrorists have launched a fresh push to retake Palmyra in Syria’s Homs Province shortly after the US launched a missile strike on an airfield used by the Syrian army to protect the ancient city.

According to the Lebanon-based al-Mayadeen TV channel, ISIS terrorists took advantage of the US attack on Shayrat Airfield, located southeast of Homs city, on Friday and attacked Palmyra, killing four people.

Sources on the ground said the offensive was successfully repelled by the Syrian army.

Since 2014, when ISIS unleashed its campaign of terror in Syria, the group has seized Palmyra twice but the army liberated it once last year and the second time in March.

The US military fired some 60 cruise missiles at the army airbase, inflicting “big material damage” on the facility, which was used by the Syrian army to defend southern regions, including the cities of Palmyra, al-Qaryatayn and Mahin in Homs Province.

Foreign-backed terrorist groups welcomed the strike, but urged additional action, with one major faction saying a single strike was “not enough.”

“Hitting one airbase is not enough, there are 26 airbases that target civilians,” a key figure in the Jaysh al-Islam faction, Mohamed Alloush, said on his Twitter account.

Mohamed Bayrakdar, another leader of the terrorist group which operates mainly around the capital Damascus, described the strike as “a bold and correct step.”

Other TakfirI groups also called for continued military action against the Syrian government.

“In my opinion, the message is political, and the message has arrived to Russia and been understood,” Issam Raes, spokesman for the Southern Front terrorist faction, told AFP.

Colonel Ahmed Osman, of the Turkey-backed Sultan Murad militant group, said: “We welcome any action that will put an end to the regime that is committing the worst crimes in history.”

Reports say there were 40 hangers for Sukhoi and Mikoyan warplanes in the airfield, which Syria had recently received from Russia.

Given the strategic location of the airfield, Syria and Russia were recently considering plans to upgrade the airbase to deploy advanced aircraft and Russia’s S-400 air defense systems at Shayrat.

Later on Friday, the Kremlin cited Russian President Vladimir Putin as saying that the US missile attack on the Syrian airbase has violated international law and significantly harmed Russia-US relations.

The US launched the military strike on Shayrat airfield in response to an alleged chemical weapons attack in the town of Khan Sheikhun in Idlib Province earlier this week.

Syria has categorically denied carrying out a chemical attack. Russia has also said the deaths in Idlib were caused when a Syrian airstrike struck a terrorist warehouse used for making bombs with toxic substances.

According to al-Mayadeen, the Syrian army had evacuated most of its warplanes from Shayrat airfield before the US attack.

Washington’s assault was met with strong condemnations from Russia, Syria and Iran.

The foreign-backed National Coalition, an alliance of terrorist groups, however said it “welcomes the strike” and urged Washington to neutralize Syria’s ability to carry out air raids.

Israel, Saudi Arabia and Turkey, along with their Western allies, joined the militants and voiced support for the militants.