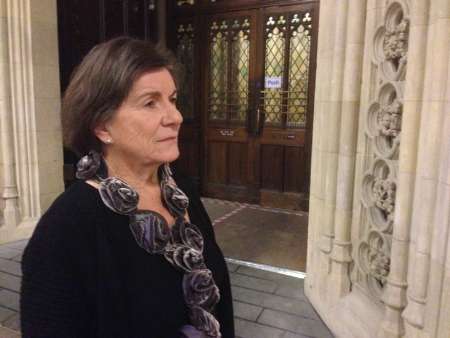 Baroness Jennifere Tonge, a British politician who has recently been suspended from her party because of alleged anti-Semitic comments, says British politicians are terrified of making anti-Israeli statements.

In an interview with IRNA in London, and commenting on the current situation in Palestine, Tonge said there are two sides to the Palestinian conflict.

First is that Israel seeks to build new towns in the West Bank and Palestinian people are being thrown out of their lands in areas which is not supposed to be controlled by Israel.

Israeli settlers are moving into houses in those townships and have their own libraries and swimming pools and they have built roads connecting to these places which the Palestinians cannot use and are stuck in their villages in the West Bank.

So the situation in the West Bank described by one Israeli as Swiss cheese that is full of holes. The holes are where the Palestinians live and the cheesy bits are the settlements and the road connecting them.

In Gaza, when Hamas won the free and fair monitored elections in 2006, the Quartet and Israel refused to accept them as winners, refused to let them form a government and so they fled into Gaza and since 2006 Gaza has been blocked almost completely by Israel.

The only thing which Israel complains about is that they try very hard to resist and fire rockets over a very uninhabited part of Israel which gives Israel excuse to bomb them.

Even if you look at the American politics, you will see that AIPAC controls Democrats and Republicans and there is no question about this.

Because they do foster relation with political parties, they take MPs of all parties on trips to Israel to show them what a beautiful country it is and to mask what is really going on in the occupied territories where they don’t take them.

There is a sort of conspiracy between America, Britain and Israel and Israel holds most of the cards. When anyone starts criticizing them, they start talking about Holocaust and after that they start to talk about anti-Semitism.

Currently in this country there is an absolute purge going on so that everyone is terrified of making any comments about the Israeli government lest they’ll be accused of anti-Semitism.

On her own story of being suspended because of hosting a so-called anti-Semitic event, the Baroness said, ‘Currently, we are beginning a lead up to commemorating the Balfour Declaration which was a declaration from British politician in 1917 that the Jews should have a home in Palestine – which we were running Palestine.

We also said in this declaration that this is provided that there was no harm to the human right or political right of the indigenous people there.

What has happened of course is that the state of Israel was created and pronounced in 1948 and Palestine was never been recognized.

We had a meeting last week to launch the commemoration of the Balfour campaign.
This meeting was run by the Palestine Return Centre which is a Charity here campaigning for the return of the Palestinian refugees

We had three very good speakers and I was chairing the meeting. It was a very hot packed place and people very well attended. Towards the end of the meeting, a young Rabbi from Neturei Karta, a sect who do not like Israel and Zionism, got up and was saying something which I was not very much catching but did not want to offend him, but towards the end he mentioned the word Boycott and because I wanted to move on to the next speakers, I said I would like anyone to say anything about BDS campaign.

The next morning I was told that I was suspended by my party because of anti-Semitic remarks.

Someone had Youtubed the sound of the man who was speaking and amongst the things he said, he was going on about Hitler and Holocaust and because I didn’t shut him up earlier and tell him that was nonsense, I was accused of being anti-Semitic.

I wish we could have a proper debate about the difference between anti-Semitism and Anti-Zionism; because no one wants to be anti-Semitic.

I am not anti-Semitic. What I campaign against is the action of the Israeli government and this is what I have got into trouble about.

I think the Israeli government is wrong, they are breaking international law and they are abusing the human rights of the Palestinian people. This is wrong and we should not be condoning it.’

To a question about the possibility of prosecuting Israel, Tonge said there was a call after the attack on Gaza that they have committed crimes. But with Israel everything gets suppressed and put on one side.

It is alleged that war crimes occurred and some pretty nasty weapons where tested on Gaza. Because of the influence that they have and, the fact that America will always block anything that goes on, they will always be on Israel’s side.Therefore, we never get anywhere.