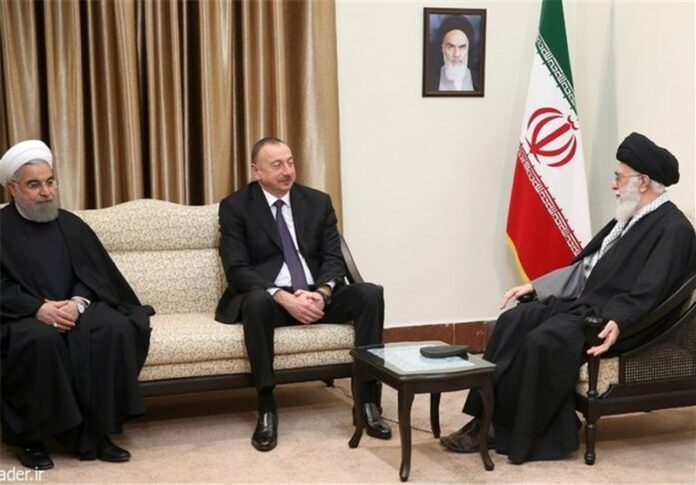 Fighting against the Takfiris’ attempts to incite sedition among nations requires strengthening Islamic activities, the Leader said Tuesday evening in a meeting in Tehran with the Republic of Azerbaijan’s President Ilham Aliyev.

Ayatollah Khamenei added that promotion of Islamic teachings and observing religious rites will encourage public support for efforts against threats.

The Leader further referred to the religious commonalities between the two nations of Iran and Azerbaijan, saying that the Islamic Republic views the two peoples’ bonds in the framework of fraternity.

Imam Khamenei said that Iran attaches great significance to the political stability, security, peace and welfare of the Azeri people.

The Leader also stressed the need for the development of economic exchanges and cooperation in different fields between the two countries.

Aliyev, for his part, highlighted the amicable ties between Iran and Azerbaijan and said the two countries share views on international issues.

“Iran plays a major role in upholding peace and security in the world,” he said, adding, “We consider Iran’s security as our own.”

The Azeri president also said threats against the two countries originate from the same sources, adding that during his trip, the two sides agreed to cooperate against terrorism.

Iran’s President Hassan Rouhani was also present at the meeting.

Heading a high-ranking delegation, the Azeri leader arrived in Tehran earlier on Tuesday.

The two countries signed 11 cooperation agreements and Memoranda of Understanding (MoUs) during the visit.

Iran and Azerbaijan have accelerated efforts in recent years to forge closer partnership in various fields, from fighting against terrorism to the exchange of electricity or gas deals.

Meanwhile, a lasting nuclear deal between Iran and six world powers that terminated sanctions on Iran has also paved the way for Tehran-Baku interaction to thrive.

Known as the Joint Comprehensive Plan of Action (JCPOA), the nuclear accord came into force on January 16.