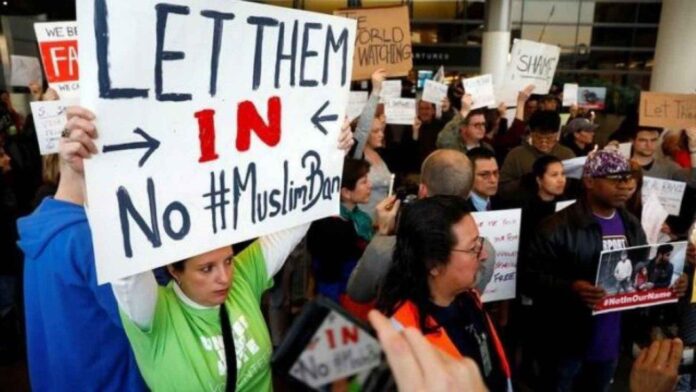 Iranian foreign minister says the ban US President Donald Trump has imposed on Muslim people is a ‘bigoted’ policy and will not make the US a safer place.

“A bigoted ban on Muslims will not keep US safer,” Iranian Foreign Minister Mohammad Javad Zarif said in a post in his Twitter account on Tuesday.

“Instead of policies empowering extremists, the US should join the real fight against them,” he went on to say.

The Iranian foreign minister’s remarks came after the US Supreme Court decided to partially reinstate President Trump’s travel ban on refugees and people from six Muslim countries, including Iran.

In a Tuesday joint press conference with his German counterpart in Berlin, Zarif had noted that “it’s regrettable that the citizens of the countries on the list have never participated in any act of terrorism against the United States and yet they are punished for acts of terrorism that have been committed by citizens of other countries who are not on the list.”

“We always believed that the Muslim ban that President Trump imposed soon after assuming office had no basis in facts and it would not help fight terrorism,” he added.

The top Iranian diplomat criticized the move as a “misplaced and misguided policy” and emphasized that it “would be the greatest gift to extremist groups who would use it as a rallying cry to attract new followers.”

“It is regrettable that the Supreme Court decided to overrule the decisions of the previous courts or at least consider overruling them, if you want to be more exact,” Zarif said, according to Press TV.

He said the Supreme Court’s decision would fail to increase anybody’s security.

“It is not a call for putting anybody else on the list, but it’s just the problem that for some terrorism and support for terrorism is measured by the amount of money they spend on buying arms from the US and not by actually being involved in acts of terrorism,” the Iranian foreign minister pointed out.