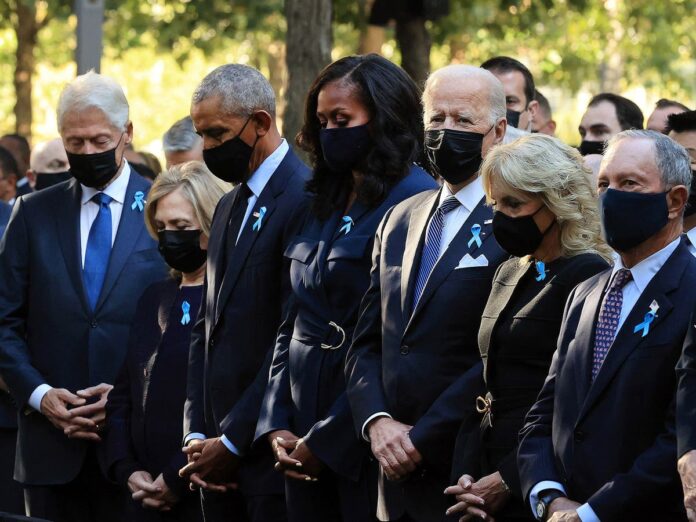 US president Joe Biden, along with former presidents Barack Obama and Bill Clinton and their wives stood somberly side by side at the National September 11 Memorial in New York, sharing a moment of silence to mark the anniversary of the 9/11 attacks, said to be the worst in the US history.

They were joined by several officials, including former Secretary of State and first lady Hillary Clinton and former New York City Mayor Michael Bloomberg. After Biden arrived at the ceremony, he was spotted talking briefly with Senate Majority Leader Charles Schumer.

The solemn ceremony at the National September 11th Memorial began with an honor guard representing the New York Police and Fire Departments and the Port Authority Police Department.

Families of people who died in New York, Virginia and Pennsylvania on September 11, 2001, are reading the names of the 2,977 people lost over the course of the emotional ceremony, which began at 8:40 am Saturday morning. The ceremony also remembers the six lives lost during the February 26, 1993, World Trade Center bombing.

Biden is not scheduled to deliver remarks during the day on Saturday, but he instead released a video statement on Friday recognizing the lives lost in the deadliest attack in US history that took place 20 years ago and calling for national unity.

“To me, that’s the central message of September 11. It’s that at our most vulnerable, in the push and pull of all that makes us human and the bottom for the soul of America, unity is our greatest strength. Unity doesn’t mean that we have to believe the same thing but we must have a fundamental respect and faith in each other and in this nation,” Biden said in the six-minute video.

Vice President Kamala Harris will deliver remarks at the Shanksville memorial later Saturday morning. Former President George W. Bush, who was president at the time of the 2001 terror attacks, will also speak.

Other officials, like Defense Secretary Lloyd Austin and Joint Chiefs of Staff Chairman Gen. Mark Milley, participated in a Saturday morning ceremony at the Pentagon and recognized the sacrifice of service members who fought in the war in Afghanistan that was precipitated by the 9/11 attacks.

“As Secretary of Defense and a veteran of the Afghan war, let me underscore again how much we owe to all those who fought and to all those who fell while serving our country in Afghanistan,” Austin said in remarks.

“As the years march on, we must ensure that all our fellow Americans know and understand what happened here on 9/11 and in Manhattan and in Shanksville, Pa. It is our responsibility to remember and it is our duty to defend democracym” he added.

Former President Donald Trump, who released a two-minute video Saturday morning marking September 11 that mostly criticized Biden’s withdrawal of US troops in Afghanistan, is not expected to attend any of the ceremonies. He is expected to provide commentary at a boxing match later Saturday.