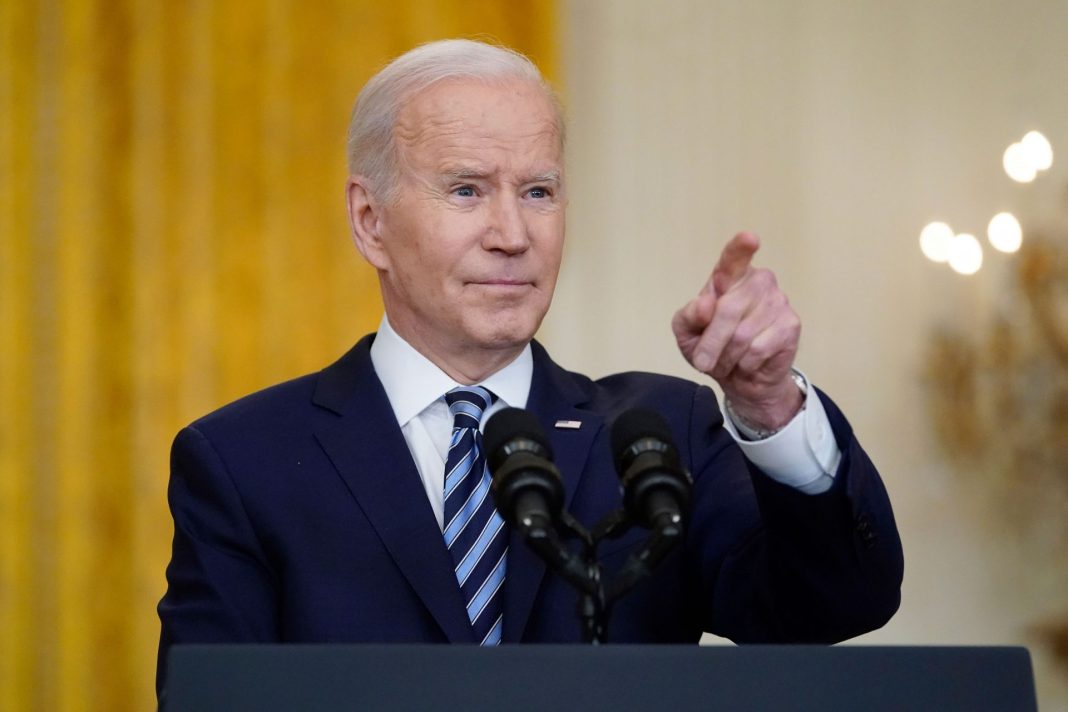 US President Joe Biden condemned Moscow for launching the military operation against Ukraine, announcing new strong sanctions and limitations on exports to Russia.

“This is going to impose severe cost on the Russian economy, both immediately and over time. We have purposefully designed these sanctions to maximize a long-term impact on Russia and to minimize the impact on the United States and our allies,” he said.

The United States is not doing this alone, he stated, adding that the 27 EU members and G7 members will participate in these sanctions.

Here are the sanctions he announced:

Limit Russia’s ability to do business in dollars, euros, pounds and yen to be part of the global economy.

Stop the ability to finance and grow the Russian military.

Impair their ability to compete in high-tech 21st century economy.

US sanctioned Russian banks that together hold around $1 trillion in assets.

He added, “we’re also blocking four more major banks. That means every asset they have in America will be frozen.”

Biden stated Putin bears full responsibility for attacking Ukraine and stressed Russia will face the consequences because of it.

“Putin is the aggressor. Putin chose this war. And now he and his country will bear the consequences,” Biden noted.

“It’s not a bluff. It’s on the table,” he said, responding to CNN’s Kaitlan Collins.

He did not answer when she asked why he was not personally sanctioning Putin today.

Biden also stated he has no plans to talk to Putin after outlining the steps the US is taking to retaliate against the Russian attack on Ukraine.

Biden noted removing Russia from SWIFT is not the direction the rest of Europe wants to go in at this moment.

Biden added removing the nation from SWIFT, a high security network that connects thousands of financial institutions around the world, is “always an option,” but said, “right now, that’s not the position that the rest of Europe wishes to take.”

“The sanctions that we’ve proposed on all their banks are of equal consequence, maybe more consequence than SWIFT,” Biden continued.

Removing Russia from SWIFT would make it nearly impossible for financial institutions to send money in or out of the country. It would deliver a shock to Russian companies and their foreign customers — especially buyers of oil and gas exports denominated in US dollars.

The Foreign Minister of Ukraine Dmytro Kuleba on Thursday urged the West to ban Russia from SWIFT in a tweet. Earlier on Thursday, CNN reported that the EU was undecided as to whether to cut Russia off from SWIFT and that EU nations were split over the decision.

Biden declined to comment when asked about whether China would help isolate Russia.

Following his remarks on the Russian invasion of Ukraine, a reporter asked the president, “Are you urging China to help isolate Russia?”

I’m not prepared to comment on that at the moment,” Biden responded.

China has refused to condemn Russia’s attack on Ukraine Thursday, instead repeating calls for parties to “exercise restraint” and accusing the United States of “fueling fire” in the tensions.

Biden said he authorized the deployment of air and ground forces in Europe to the eastern flank of allies and reaffirmed the United States’ commitment to defend NATO.

“We’re also taking steps to defend our NATO allies. Particularly in the east,” the US president added.

Biden continued, “Tomorrow, NATO will convene a summit. We’ll be there to bring together the leaders of 30 allied nations and close partners to affirm our solidarity and to map out the next steps we will take to further strengthen all aspects of our NATO alliance.”

The US Secretary of Defense has ordered the eployment of 7,000 US service members to Europe, a senior defense official told reporters shortly after Biden’s announcement.

The United States is prepared to respond to cyberattacks by Russia, said Biden, adding that for months the US has been working with the private sector to bolster its security.

“If Russia pursues cyberattacks against our companies, our critical infrastructure, we are prepared to respond,” Biden said during remarks from the White House.

“For months, we’ve been working closely with the private sector to harden their cyber defenses [and to] sharpen our ability to respond [to] the Russian cyberattacks as well,” he added.

“America stands up to bullies; we stand up for freedom,” Biden continued, noting, “This is who we are.”

US officials remain on high alert for any cyber activity against key domestic targets including banks and critical infrastructure, an official recently told CNN. US officials told businesses to watch for potential ransomware attacks following sanctions issued against Russia earlier this week.

Putin announced a “military operation” in Ukraine on Thursday. Moscow claims that the country’s military has achieved the goals it set out for the first day of its invasion of Ukraine.

An adviser to the Ukrainian presidential office has said the Chernobyl nuclear power plant has been captured by Russian forces after a fierce battle for control of the now-defunct site.

“It is impossible to say the Chernobyl nuclear power plant is safe after a totally pointless attack by the Russians,” Mykhailo Podolyak stated.

“This is one of the most serious threats in Europe today,” he added.

Three US officials have told Newsweek they expect Ukraine’s capital Kyiv to fall to incoming Russian forces within days.