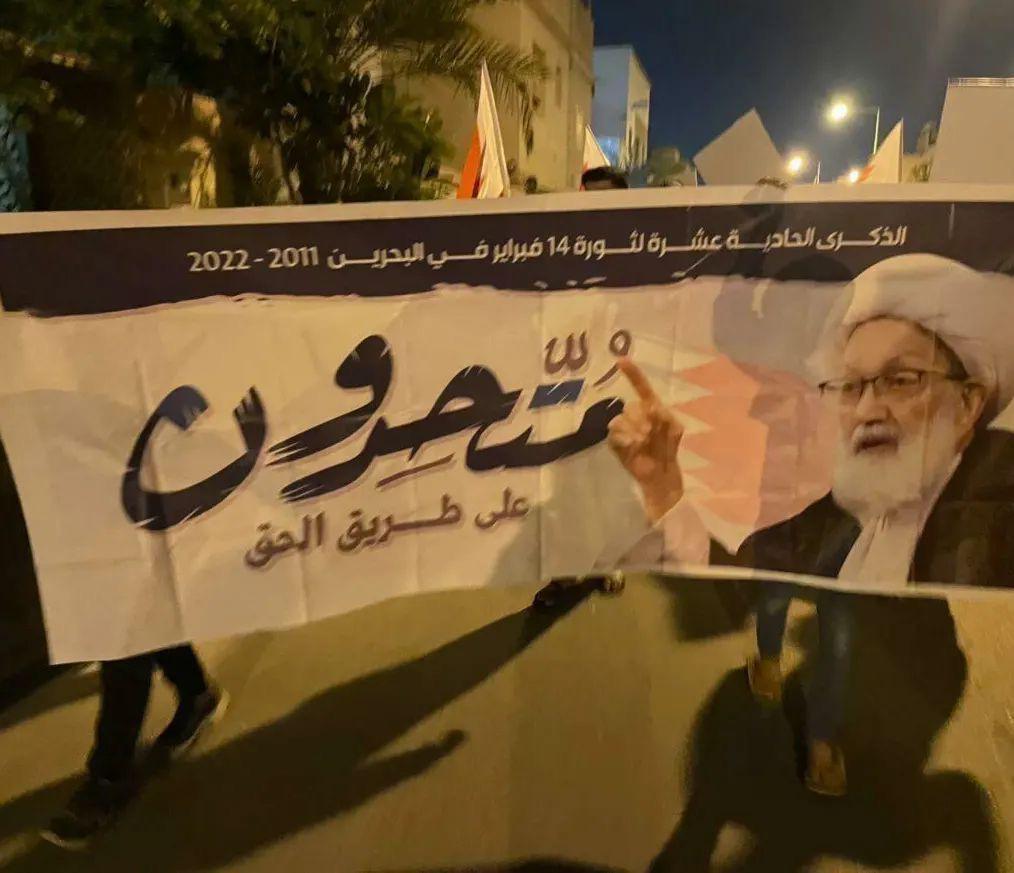 Bahrainis poured into the streets Monday night on the anniversary of their 2011 uprising against the Al Khalifa. They also condemned Israeli Prime Minister Naftali Bennett’s visit to the Persian Gulf country.

The demonstrators staged mass rallies in Manama as well as in other cities and towns Monday night to mark the eleventh anniversary of the February 14 uprising.

“11 years of patience and steadfastness on the path of truth.. Bahrainis demonstrate in the Muqsha area on the anniversary of the start of the February 14 revolution,” main opposition group, the al-Wefaq National Islamic Society, tweeted.

“Our demands are just… Bahrainis are demonstrating on the anniversary of the start of the February 14 revolution, in confirmation of the continuation of the movement demanding rights,”it added.

Demonstrations have been held in Bahrain on a regular basis ever since a popular uprising began in mid-February 2011, with the participants demanding that the Al Khalifah regime relinquish power and allow a just system representing all Bahrainis to be established.

The overnight demonstrations coincided with Bennett’s visit to Bahrain, the first since they established relations under a 2020 US-sponsored normalization deal.

Bahrain normalized its relations with the Israeli regime in mid-September 2020, infuriating Palestinians, who view the deal and the likes with the United Arab Emirates (UAE), Sudan and Morocco as a betrayal of their cause.

Palestinians seek an independent state in the occupied West Bank and Gaza Strip with East al-Quds as its capital.

“The leaders will discuss additional ways to strengthen bilateral ties … especially the advancement of diplomatic and economic issues, with an emphasis on technology and innovation,” it continued.

Hossein al-Dihi, the deputy secretary-general of Bahrain’s main opposition group, censured Bennett’s visit to the country and said, “We, the people of Bahrain, will remain defenders of the Palestinian cause and do not accept any normalization deal with the occupying regime.”

“Our nation seeks a dignified life and freedom, and the fight against political and financial corruption and the plunder of public property,” he added.

The senior member of the al-Wefaq called for an end to all forms of political repression and plunder of national sovereignty, saying the Bahraini people live under the most oppressive authoritarian regime and suppression of freedoms.

“With the help of each other, we and the opposition have succeeded in showing ourselves to the world, revealing the truth, exposing the government and showing their political, media and legal defeat,” al-Dihi said, adding, “We are outside Bahrain, because our country has become a big prison and the members of Al-Wefaq and the opposition are also detained, and no political work can be done in Bahrain.”

Dihi stressed that “the people of Bahrain will continue to work for justice, freedom and democracy.”

“The Bahraini government is not worried about regional and international developments, but seeks to engage with the Zionists, while all future developments are going against their interests,” he continued.

Islamic Jihad said such trips bring nothing but threat and danger to Arab states.

“The movement considered that normalization and receiving Zionist officials are encouraging their aggression against our people and our land,” the statement added, calling on the “brotherly Bahraini people and all the peoples of our nation to continue their rejection of normalization.”

“The Bahraini regime’s reception of the criminal Bennett, in light of the continuation and escalation of the Zionist aggression against our people, our families and our land, especially the city of Jerusalem, is a treacherous stab against our people, a free reward and a cover for the occupation, and encouragement to continue its fascist crimes,” it continued.

The movement called on “the Bahraini people, who have the original positions that we saw in their movement rejecting normalization and the miserable behavior of their regime, to continue their march and movement in order to expose the normalizers.”

“Hamas expresses its deep regret for Bahrain’s reception of Bennett, who is responsible for the policies of collective punishment and the crimes of displacement, settlement and racism, which are still being committed against our Palestinian people in occupied Jerusalem, Sheikh Jarrah neighborhood, Nablus, Jenin, and besieged Gaza Strip,” Barhoum added.

The Hamas spokesman stressed that such visits by the leaders of the occupation to our Arab and Islamic capitals will not “provide him with alleged legitimacy, and will not cover up his crimes, terrorism and racism, nor will they bring good, security and stability to our region and its peoples, who are still suffering from this colonial Zionist project.”

“We renew our rejection of all forms of normalization with the occupation, and we call on our normalizing brotherly Arab countries to retract this wrong path,” the spokesman noted.