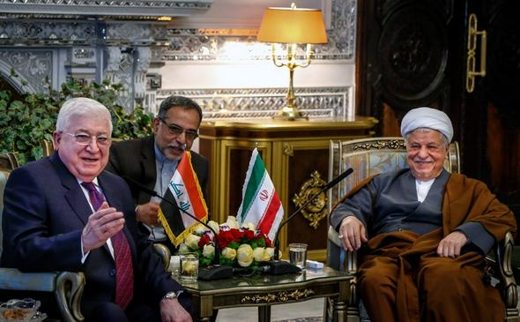 Ayatollah Akbar Hashemi Rafsanjani has said that time is now ripe for different Iraqi sects – including Shiites, Sunnis and Kurds – to maintain security in Iraq.

“The policy of the Islamic Republic of Iran is to help the Iraqi government and nations in all areas,” Ayatollah Hashemi Rafsanjani said in a meeting with Iraqi President Fouad Massoum in Tehran on Wednesday.

He noted that time is now ripe for different Iraqi sects – including Shiites, Sunnis and Kurds – to maintain security in Iraq.

The Iraqi president, for his part, pointed to Iran’s good role in helping the Iraqi nation in different areas, and addressing Ayatollah Rafsanjani said, “You are one of the personalities that the Iraqi nation takes honor in”.

Earlier in the day, Leader of the Islamic Revolution Ayatollah Seyyed Ali Khamenei in a meeting with the visiting Iraqi president warned the Saudi regime against the repercussions of the relentless airstrikes against the Yemeni nation.

“The Saudis have committed a big mistake in Yemen and the consequences of the crimes they have committed will certainly backfire on them,” Ayatollah Khamenei said during the meeting also attended by President Hassan Rouhani.

The Iraqi president was officially welcomed by President Hassan Rouhani on Wednesday morning.This is the first visit of President Massoum to Iran since he took office last summer.