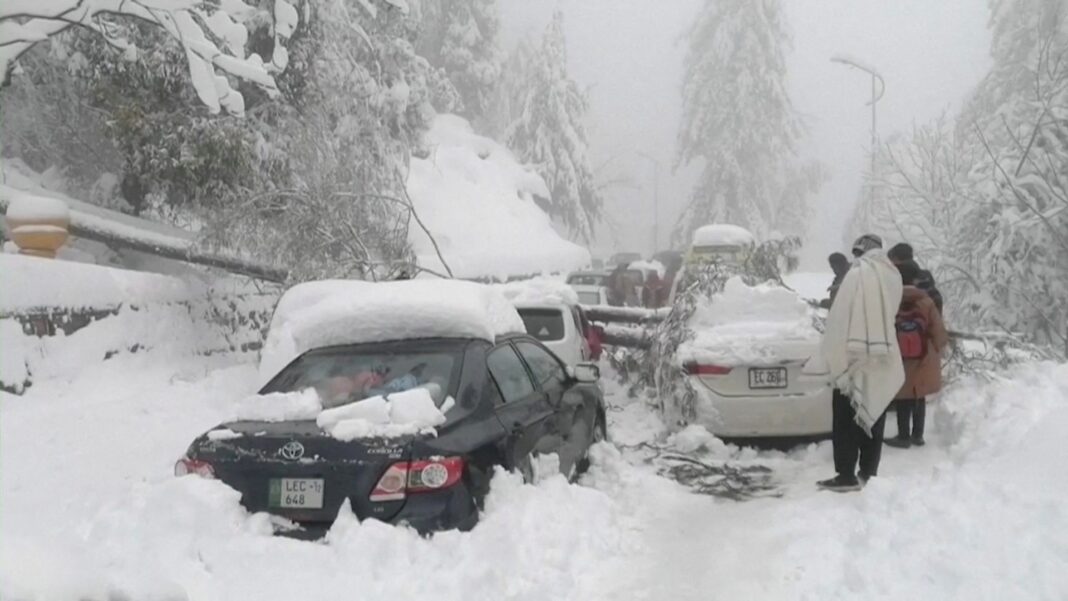 At least 21 people died in an enormous traffic jam caused by tens of thousands of visitors thronging a Pakistani hill town to see unusually heavy snowfall.

Police reported that at least six people had frozen to death in their cars, while it was not immediately clear if others had died from asphyxiation after inhaling fumes in the snowdrift.

Video and images shared on social media showed cars packed bumper-to-bumper, with one-metre-high (three-foot) piles of snow on their roofs.

“People are facing a terrible situation,” Usman Abbasi, a tourist stuck in the town where heavy snow was still falling, told AFP by phone.

For days, Pakistan’s social media has been full of pictures and video of people playing in the snow around Murree, a picturesque resort town built by the British in the 19th century as a sanatorium for its colonial troops.

The Punjab province chief minister’s office announced Murree had been declared a “disaster area” and urged people to stay away.

Prime Minister Imran Khan stated he was shocked and upset at the tragedy.

“Have ordered inquiry & putting in place strong regulation to ensure prevention of such tragedies,” he added.

Authorities warned last weekend that too many vehicles were trying to enter Murree, but that failed to discourage hordes of daytrippers from the capital.

“It’s not only the tourists, but the local population is also facing severe problems,” tourist Abbasi told AFP, noting, “Gas cylinders have run out and drinking water is not available in most areas — it’s either frozen or the water pipes have been damaged due to severe cold.”

He announced hotels in the town were running out of food, and mobile phone services were patchy.

The town of around 30,000 clings to the side of steep hills and valleys and is serviced by narrow roads that are frequently clogged even in good weather.

Sheikh Rashid stated residents had sheltered people trapped in the town and provided blankets and food to those they could reach on the outskirts.

Authorities said schools and government buildings had taken in those who could make it to the town from the clogged roads.

Helicopters were also on standby for when the weather cleared.

Rescue 1122, Pakistan’s emergency service, released a list naming 21 people it said had been confirmed dead. It included a policeman, his wife and their six children.

Hasaan Khawar, a spokesman for the Punjab government, noted they had frozen to death inside a trapped car.