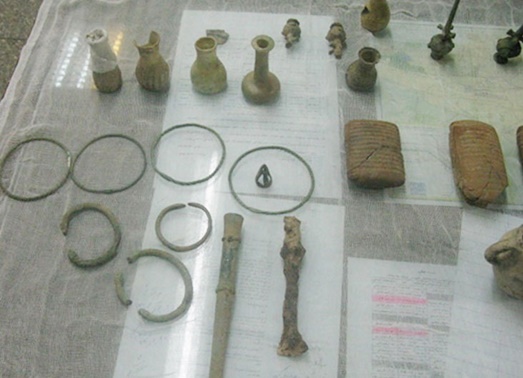 More than 10 ancient relics, worth nearly $1m, were recently seized by the Police in one of Tehran’s subway stations from a man who seemed to have transferred them from Iraq to Iran.

According to a report by ISNA, as translated by IFP, the antiquities recovered in Tehran’s Sadeghieh metro station were later handed over to the Tehran Province Department of Cultural Heritage.

Mohammad Reza Nemati, the head of the Department, told ISNA that the relics included 6 glass scent bottles, some bronze bangles dating from a different historical period, including the 3rd millennium BC and the Sassanid era, and also four clay tablets belonging to Mesopotamia.

All relics have great historical value, and experts are currently analyzing them to determine the exact civilizations they belonged to, he went on to say. It is very likely that the relics are of Iraqi origin, as some of them belong to the Mesopotamian civilization.