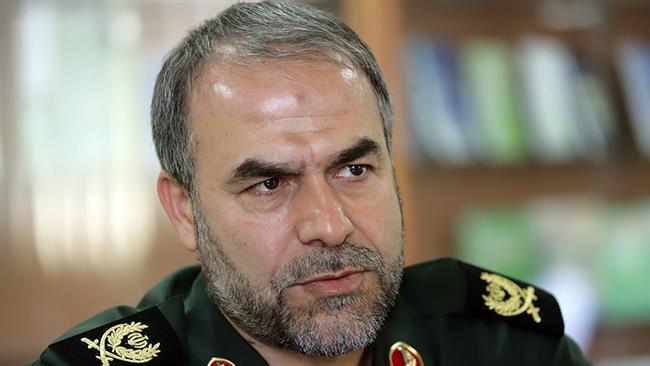 “Those who have created a crisis in Syria and stood by the Zionists as their allies in different wars name Lebanon’s Hezbollah [a] terrorist [organization],” senior adviser to Leader’s representative to the IRGC, Brigadier General Yadollah Javani, said on Saturday.

On Wednesday, the six-nation [Persian] Gulf Cooperation Council issued a statement labeling Hezbollah a terrorist organization. The bloc, comprising Saudi Arabia, Qatar, the United Arab Emirates, Oman, Bahrain and Kuwait, however, did not provide any evidence for its allegations.

Javani said the Arab bloc’s groundless accusation against the resistance group is a self-harming act and a strategic mistake that would discredit the council.

He emphasized that Hezbollah is a popular movement which has been formed to confront the Israeli regime, defend Lebanon’s territorial integrity and protect rights of Muslim nations.

The IRGC commander said the [P]GCC move to declare Hezbollah a terrorist body clearly shows that the Arab bloc is following in the footsteps of the Zionists, adding that their act is in line with fulfilling the demands of the United States.

“The countries which have carried out this measure pay no heed to rights of Muslims, the interests of the Muslim world and even [those of] Arab states. Their measures are in line with responding to requests of the Americans and the Zionists,” Javani pointed out.

He said Hezbollah is a distinguished movement in the Muslim world which has a special position among Muslims and Arab nations, adding that some countries immediately reacted to the bloc’s move.

The decision by the [P]GCC to blacklist Hezbollah has met opposition and criticism.

Algeria refused to classify the movement as a terrorist organization. Palestinian resistance movement, Islamic Jihad, also praised Hezbollah as a resistance movement which has a history in the struggle against the Zionist entity as well as in supporting the Palestinian cause. Iran, Syria and Yemen’s Houthi Ansarullah movement have also slammed the move by the [P]GCC.

The move by the six-nation Arab bloc came days after Riyadh halted USD 4bn in aid to Lebanese security forces. The decision came following recent victories by the Syrian army, backed by Hezbollah fighters, against the Takfiri militants fighting to topple the Damascus government.

Hezbollah Secretary General Seyyed Hassan Nasrallah has said the Saudi regime seeks to instigate “strife” between Shias and Sunnis in the region, urging the Lebanese not to be intimidated by threats posed by Riyadh and Tel Aviv.