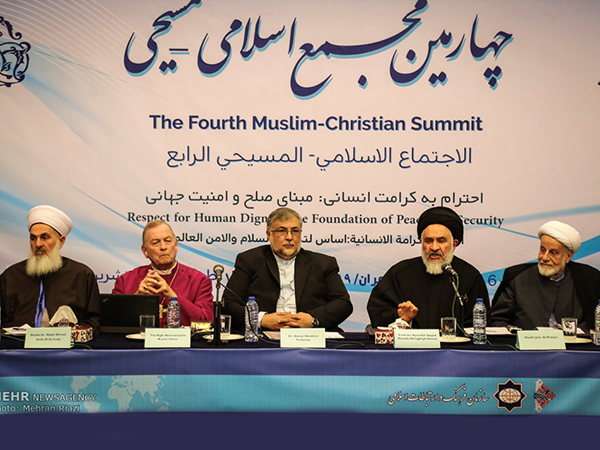 The fourth round of talks between Muslim and Christian thinkers have started in the Iranian capital of Tehran, with representatives of Shiism, Sunnism, Catholicism, and Anglicanism in attendance.

Representatives of Shiite and Sunni Islam as well as Catholic and Anglican Christianity gathered in the 4th Christian-Muslim Summit kicked off on Sunday in Tehran.

According to a report by the official website of Iran’s Islamic Culture and Communication Organization, the summit started its work with the motto ‘Respect for Human Dignity: the Foundation of Peace and Security’.

The opening ceremony was attended by Ayatollah Taskhiri, an advisor to the Leader of the Islamic Revolution Ayatollah Seyyed Ali Khamenei and Ali Younesi, who is President Hassan Rouhani’s special aide on ethnic groups and minorities’ affairs.

The issues discussed in this summit include “Religious dialogue: A solution to global peace and security”, “Role of family in establishment of peace and security”, “Religions’ solution for countering religiophobia and Islamophobia”, “Role of religions in avoiding violent actions”, “The necessity for cessation of violence in Palestine, Syria, Yemen, Bahrain, and Iraq”, and “The necessity for cessation of support for ISIS, Nusra Front, Al-Qaeda, and other terrorist groups.”

The closing ceremony of the summit will be held on Wednesday, November 9.

The idea of holding Christian-Muslim summits was raised in a 2008 meeting between the Bishop of the Episcopal Diocese of Washington, DC, John Bryson Chane, and the then Iranian president in Tehran.

The first Christian-Muslim summit was held in 2009 in Washington, DC, in the US. The Lebanese capital of Beirut hosted the second summit in 2011 and the third was held in The Vatican in 2014.

Here are Mehr’s photos of the opening ceremony held in Tehran: