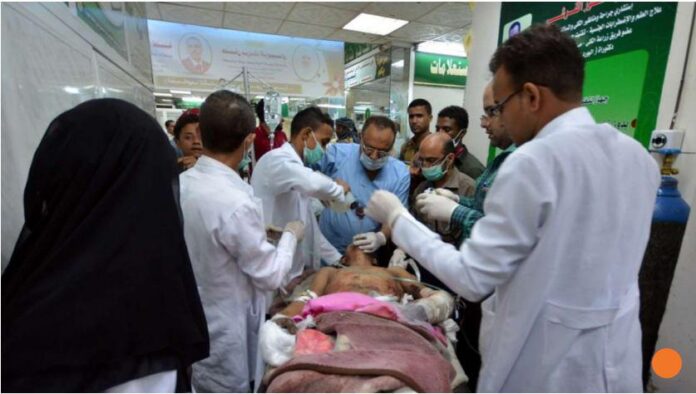 Dozens of prisoners and security personnel were feared dead after Saudi-led air strikes on Saturday battered two prisons inside a security headquarters in a western port city, security and medical officials said.

The Saudi-led coalition’s air strikes bombed the al-Zaydiya security headquarters in the Red Sea port city of Hodeida. The building contained two prisons, and many prisoners along with security forces were killed in the strikes, the officials said.

The city is under control of Yemen’s Houthi fighters who seized the capital and much of the northern region in 2014. The Houthis’ TV network al-Masirah said that 43 people were killed in the airstrikes but it was not immediately possible to verify that account, as reported by AP and covered by YJC.

The air strikes came hours after warplanes rained bombs on houses of civilians in the western city of Taiz, killing at least 18 people, including children, earlier in the day.

The latest airstrikes also come at a time Yemen’s fugitive president has turned down a UN peace deal aimed at ending the country’s devastating conflict, saying it “rewards” Yemen’s rebels.

The proposed peace deal gives the Houthis a share in the future government. It also reduces some of the president’s powers in exchange for Houthis’ withdrawal from major cities.

Hadi made his remarks during a visit by the UN envoy to Yemen, Ismail Ould Cheikh Ahmed, in the Saudi capital, Riyadh, on Saturday.

The conflict in Yemen has left more than 10,000 dead and injured and displaced nearly 3 million people. The Arab world’s poorest nation had already been suffering from high rates of malnutrition, and the war and a blockade imposed by a Saudi-led military coalition have pushed the country deeper into starvation and turmoil.

Rights groups have accused the Saudi-led coalition of killing civilians, while trying to target Houthi Ansarullah Movement. Weddings, funerals, schools and hospitals have been bombed in the past year.