40 Iraqis per Day Killed in Past 6 Months Statistics indicate that Iraq’s death toll from terrorist attacks within the past six months has amounted to 7,128 people, which means almost 40 Iraqis have been killed each day.

The ISIS terrorist group has killed 201 Iraqi civilians just in its occupied areas. Bombings in different parts of the country have taken the highest toll, i.e. 91%, and 63 Iraqis were killed in action in the war front. 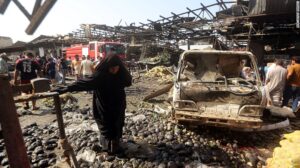 United Nations Spokesperson announced earlier that the death toll from terrorist attacks and gruesome violence in Iraq has hit 662 in June and over 1,457 have sustained injuries.

ISIS Takfiri [extremist] terrorists seized parts of the north and northwest of Iraq in 2014 to carry out the most heinous terrorist crimes against civilians and military.