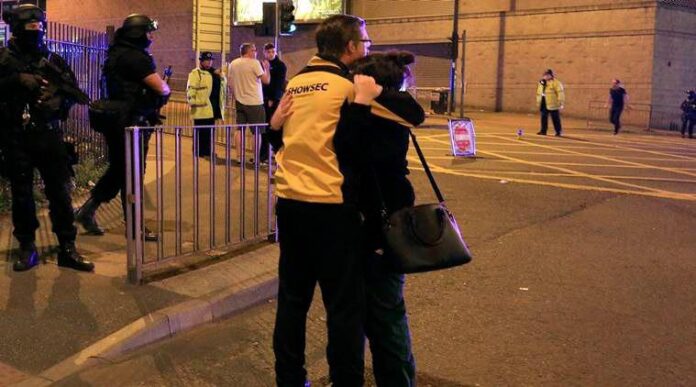 At least 22 people were killed and 59 wounded after an ISIS terrorist attack hit the Manchester Arena.

Thousands of concert-goers were packed into the venue to see American singer Ariana Grande when two explosions were reported.

British Prime Minister Theresa May has called it “an appalling attack”. 22 have so far lost their lives and 59 injured following the attack, which was claimed by the ISIS terrorist group.

Multiple witnesses reported hearing two “huge bangs” at the venue shortly after US singer’s gig finished at around 10.30pm on Monday evening.

The area around the arena was swamped with police and emergency services and approach roads were cordoned off.

Minutes later eyewitnesses described seeing people “running and screaming” from the arena, with some covered in blood.

The incident is now being treated as a terrorist attack.

Swarms of armed police were joined by a bomb disposal unit as teams from across the region worked to secure the area and help the injured.

Grande, who was not hurt in the blast, tweeted earlier that she was “broken” by news of the casualties:

He says that while police believe the man was acting alone in the attack last night, investigations are ongoing to establish if he was part of a network.

He says police believe the man was “carrying an improvised explosive device, which he detonated causing this atrocity”.