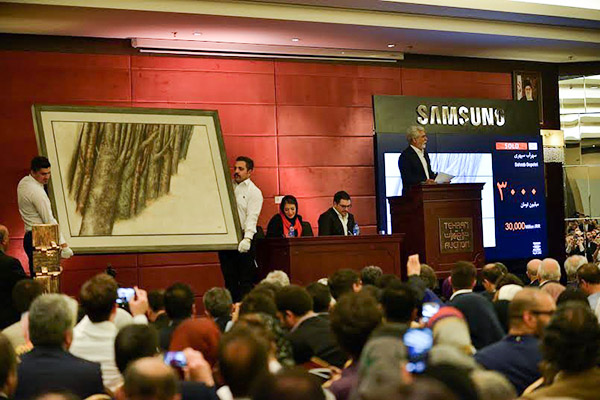 The 5th edition of the Tehran Auction was held on 27 May at Azadi Hotel where the best of Iranian art was introduced and sold to art collectors, with total sales breaking the $8m mark.

Last night, Azadi Hotel hosted the 5th edition of the Tehran Auction, where the best of Iranian art ranging from established and emerging artists was presented to art collectors and the global audience.

50 out of 80 presented artworks were ‘Untitled’, which, considering the fact that modern artworks are usually untitled, becomes meaningful only when compared to the 18 classical works, all with rather lengthy titles.

40 works, which made 50% of the auction, were by non-living artists.

One artwork failed to be sold, and two works sold below their low estimates, while 31 works were sold at the estimated prices and 46 above them, which is considered a major success for the Tehran Auction.

The first of its kind in Iran, Tehran Auction was launched in 2012 as an independent and private initiative to support the domestic art market as a key basis for the international market.