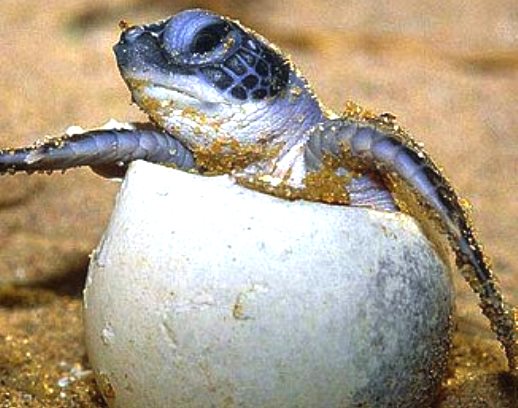 Coinciding with National Environment Week (June 4-10), the first baby hawksbill sea turtles emerged from their eggs in the protected zone of Kish Island.

“This critically endangered species is undergoing the 10th round of the protection and monitoring program on the island,” said Maryam Mohammadi, head of the Environment Office at Kish Free Zone Organization.
“On the eve of World Environment Day (June 5), the first baby turtles emerged and the rest of the eggs are expected to hatch one after the other over the next few days,” the official was quoted as saying by IRNA.
The turtles’ protection and monitoring site is one of Kish’s top attractions, which draws nature lovers to the island each year to see the conservation process from up close. It is located on the southern coast of the island and enthusiasts can pay a visit after making arrangements with local park rangers.
Protecting the turtles from poachers, guarding their nests and eggs against thieves, protecting baby turtles after they hatch and guiding them toward the sea, and biometric scanning and tagging female turtles that come to the shore to lay eggs are but a few measures of the conservation plan.Since its launch in 2006, the Kish Sea Turtles Conservation and Monitoring Program has directed significant numbers of turtles to the sea each year, increasing their survival rate.
The hawksbill sea turtle (Eretmochelys imbricata) is a marine reptile that enters the Persian Gulf waters each year from the Indian Ocean between February and June to lay eggs. The eggs across a patch of land are then unearthed by conservationists and transferred to the protected zone.
This rare animal is easily distinguished from other sea turtles by its beak-like mouth (from which its common name is derived) which helps pull sea sponges, its principal food, out of the curves of corals. It has a key role in the operation of marine ecosystems and the life of corals.
The International Union for Conservation of Nature classifies the hawksbill as critically endangered. The turtle has also been listed on Appendix I of the Convention on International Trade in Endangered Species, which outlaws the capture and trade of hawksbill sea turtles and products derived from them as well as Appendices I and II of the Convention on the Conservation of Migratory Species of Wild Animals.