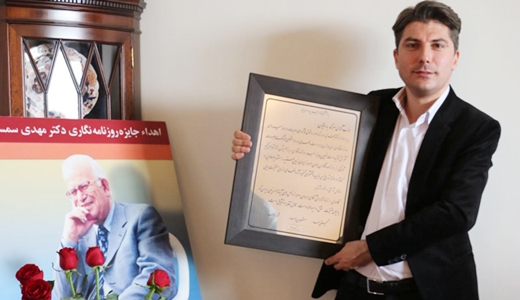 The Iranian journalist Serge Barsaghian won the 9th Hope Award, which is given to young and creative journalists working in Iranian press.

The award ceremony (which is given in memory of Dr. Mehdi Semsar, a late veteran of journalism in Iran) was held on Friday May 13, attended by journalists and the family of Dr. Semsar.

The prize was presented to Serge Barsaghian. Since 2000, this young journalist has been working with various reformist magazines and newspapers. Currently, he is the editor of the websites History and Iranian Diplomacy. He will soon take up his position at the new website, Vaght-e Iran. He is also the secretary of the sociology group of the monthly publication Mehrnameh.

During the ceremony, Shirin Semsar, Dr. Semsar’s daughter, said, “When we decided to found this award for journalism, we wanted to name it not only after my father, but to call it something related both to him and journalism. Undoubtedly, hope can keep the light of love, friendship and belief on. My father faced many difficulties in his life in journalism, but with faith and belief, he followed the path of truth. He showed the new generation the path to combat negative thoughts and interpretations by translating books that brought them hope. For this reason, he translated “What is to Be Done?”when society felt disappointed and broken after the 1953 coup d’etat.

Serge Barsaghian, the Armenian Christian winner of the award, showed his appreciation and gratitude to the organizers, and said, “Dr. Semsar was one of the journalists whose ink was honour, and whose paper was honesty. This was a very difficult thing to be, for journalists of that time, and it was a noble characteristic. In receiving this award, one should emulate the essence of Dr. Semsar.”

IFP extends its congratulations to Serge Barsaghian, winner of the 9th Hope Award.