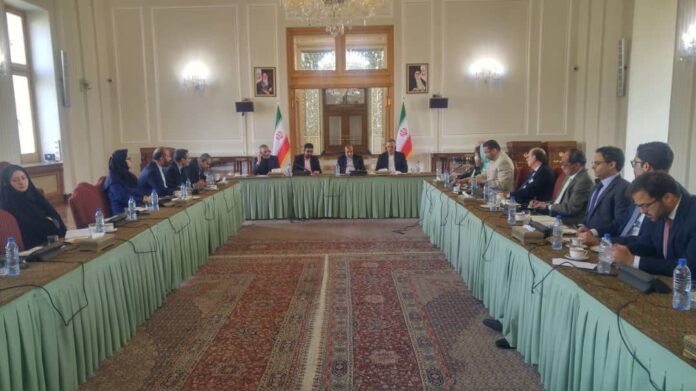 The Yemeni ambassador to Tehran attended a joint meeting with Latin American ambassadors in the Iranian capital, hosted by the Islamic Republic’s foreign ministry.

At the meeting, Iranian Foreign Minister’s Senior Assistant for Special Political Affairs Ali-Asghar Khaji touched upon the Islamic Republic of Iran’s stance in support of a political solution to preserve Yemen’s territorial integrity, independence and unity, and a four-point plan for the political resolution of the crisis.

Khaji also described Stockholm agreements as an important step in Yemen’s political process and regretted the other party’s disruptions in its implementation.

The Iranian official said the Saudi-Emirati coalition’s air, maritime and land siege of Yemen has blocked the fair access of all Yemenis to humanitarian aid and emphasised the need to halt military operations against the country.

The Yemeni ambassador also outlined the latest political and military developments in Yemen. Referring to the Government of National Salvation’s initiative to halt drone and missile strikes on Saudi Arabia on the condition that the other party would do the same, he expressed readiness to stop the war as soon as possible.

He called the humanitarian situation in his country very regrettable and called on Latin American countries to step up their pressure to lift the blockade and send humanitarian aid to Yemen.

Latin American ambassadors, in turn, praised the Iranian Foreign Ministry for providing such an opportunity, admiring the Yemeni people’s resistance against the invaders and insisted on political solution to end the Yemen war and send humanitarian aid to the country.

At the end of the meeting the participants put stress on the following issues:

– The need for serious consideration of the humanitarian situation in Yemen and the speeding up of sending humanitarian aid to Yemen
Saudi Arabia and a number of its regional allies launched a devastating war against Yemen in 2015, with the goal of bringing the government of Hadi back to power and crushing the Ansarullah movement.

Estimates show that the war has claimed over 90,000 lives so far.
The war has also taken a heavy toll on the country’s infrastructure, destroying hospitals, schools, and factories. The United Nations says more than 24 million Yemenis are in dire need of humanitarian aid.