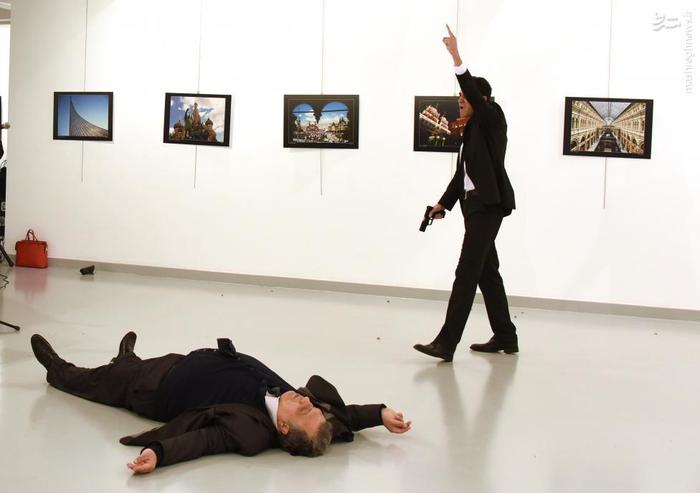 The Monday night assassination of Russian Ambassador to Ankara, Andrey Karlov, has been followed by diverse reactions in Western and Arab media, some of which are quite surprising.

According to a report by IFP, Russian Ambassador Karlov was shot in the back and killed by an off-duty police officer when giving a speech at an Ankara art gallery.

In reaction to the assassination, some media outlets raised the possibility that the relations between Ankara and Moscow might be severed. However, Russian President Vladimir Putin stressed that his country is resolved to resume its ties with Turkey and described the ‘tragic’ attack as a move to impede the ongoing talks on the issue of Syria.

Abdel Bari Atwan, the renowned editor-in-chief of Rai al-Youm, even believes that, contrary to the speculations, the assassination of Karlov would result in warmer relations between Turkey and Russia.

“Radical forces have infiltrated into the Turkish ruling system, and this is the result of decades of work on extremist thoughts. As a result of such infiltration, every now and then, something happens in Turkey which is against the country’s current policies,” Atwan noted.

Nasser Kandil, a prominent Lebanese journalist, also raised the possibility that Bandar bin Sultan, the Saudi prince, is behind the assassination.

According to Kandil, Saudi Arabia is not pleased with its absence from the ongoing talks between Iran, Turkey, and Russia on the fate of Syria. Riyadh used to play a key role in previous sessions, and often prevented Iran from being part of the negotiations.

Now, the talks are held between Tehran, Moscow, and Ankara, and the Syrian dissidents have to accept what they say. Feeling left behind, Saudi Arabia is trying to warn Turkey against getting too close to Russia, Kandil said.

Meanwhile, the journalists working for Qatar’s Al Jazeera TV seem to be excited by the assassination. Mohamed El-Moctar Shinqiti, a blogger for Al Jazeera website and an Associate Professor at Qatar’s at Hamad Bin Khalifa University, said in a post in his Twitter account that the Turkish assassin, Altintas, deserves the title ‘Martyr of Aleppo’.

Elham Bader, a chief journalist in Al Jazeera, also said in a post in her Twitter account that the assassination of Russian ambassador was ‘a humanitarian reaction’, and that ‘Russia deserves worse than that’!

Meanwhile, the way Western media, including Reuters, covered the assassination was also meaningful. In the majority of news reports, ‘the Russian ambassador was shot dead in Ankara’ was the focus. The shooter was not at all described as a ‘terrorist’. Some media outlets even highlighted the fact that a man wear a suit and a tie has shot down an ambassador.

This is while the same media outlets referred to the similar assassination of Christopher Stevens, the American ambassador to Libya, in 2012 as a terrorist attack.