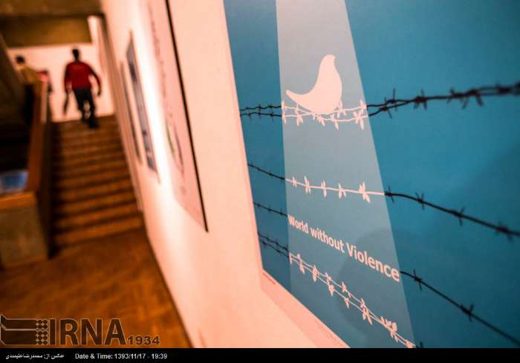 The minister of culture and Islamic guidance and the president Rouhani’s chief of staff attended an opening ceremony of a poster exhibition dubbed “World Free of Violence”.

In the inauguration ceremony, President Rohani’s Chief of Staff Mohammad Nahavandian and Minister of Culture and Islamic Guidance Ali Jannati and his Deputy for Art Affairs Ali Mouradkhani were present.

Jannati said, “Artists should join others in the fight against violence, and try their best to make peace a feature of the world.”

Meanwhile, Nahavandian told the opening ceremony, “Over the past 18 months, thanks to Iranian unity, we have managed to ease the economic problems of the nation. The Iranian solidarity has forced Westerners to accept the realities and stop making illegitimate threats.”

The exhibition shows 93 works of world and Iranian artists in the venue of Niavaran Cultural Center.