“Woman against Woman” on the Wall of Mojdeh Gallery 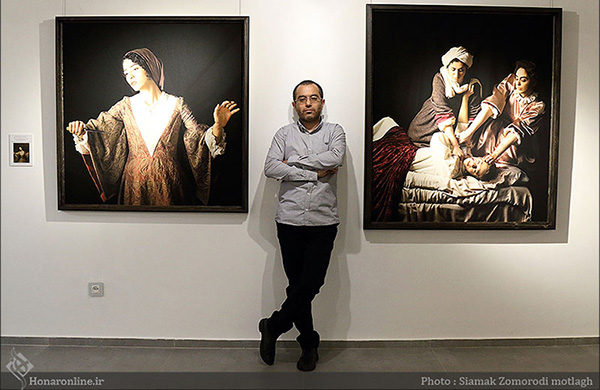 Woman against Woman is a curious title for a photography exhibition which remakes great painters’ works, such as those of Picasso, Lucian Freud, Rembrandt, Lucas Cranach, Frida Kahlo, Lorenzo Lotto, Edvard Munch, Artemisia Gentileschi and Vasily Perov. The collection, however, brings up challenging and contemporary matters. Soroosh Milanizadeh’s work tries to analyze women’s lives through a new window, from a sociological perspective, presenting ten photographs of varying dimensions.

The photographs were chosen from among 611 art history paintings, and all refer to western works. The description of each photo is installed under it on a small label.

Soroosh Milanizadeh explains about the different methods of work involved in this collection, “Research for this project was done in a compressed six-month period. After that, we started the pre-production. At this stage Anna Sani was costume designer, Ashkan Vosughi was make-up designer and I was stage designer. After character creating of each role, 22 actors and artists who were all professionals in their own fields were selected.”

Even though the women in his photographs have eastern faces, Soroosh Milanizadeh has universalized his photos by removing the factor of geography from them. He has a critical view toward the subject of women and the harm that women can cause each other. He said that the criterion for choosing ten paintings from 611 was the subject of the works. “The most important elements for filtering the paintings for me were its themes.  In choosing the painting, we focused on their stories more than anything else.”

In his photographs, Milanizadeh has tried to transfer his thoughts in a way that, by looking at them, the audience realizes that these occurrences, these acts of harm, can happen anywhere in the world and at any time, and one can’t separate oneself from them.

He says, “I believe that violence against women is not created only by men. In fact, women’s violence against each other is even greater. I’m trying to find out why, and am seeking the hidden reasons for it. By looking at the photographs, the audience see themselves either as the victim or as the person who is applying the violence. My main goal is that the audience see themselves inside these works.”

Woman against Woman will be exhibited in Mojdeh Gallery in Tehran until May 20.