Why should government endure the cruel taunts of opponents? 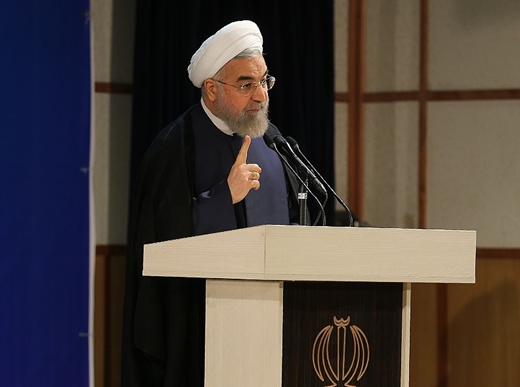 President Rouhani has defended his government’s nuclear and economic policies, hitting out at those who treat Iran’s negotiators impolitely and indecently.

President Hassan Rouhani has said that his government is walking down the right path and consults experts before taking any step.

The President made the comment at a gathering of governors and governors-general from across the country on Saturday and added that his government is determined to fulfill the promises it has made despite the existing shortcomings.

Entekhab.ir covered the president’s remarks at the meeting. The following is the translation of part of the report:

President Rouhani said that to the government which has the responsibility to organize elections, people’s vote is of great significance and that governors-general should not be intimidated by pressures piled on them by different parties.

He said no political and factional mindset can be eliminated in the country, adding elections will be meaningless in the absence of competition. He also said judicial officials should verify the qualification of contenders, adding rumors – that government, IRGC, the Army, IRIB or a certain governor general confirms a certain candidate – have no place in the elections.

He went on to say that his government should make good on its promises, adding the Cabinet is walking down the right path. He said government’s measures come on the back of consultations with experts, not based on fortunetelling and prophetic dreams [a reference to the former government which was said to resort to dreams and clairvoyant powers to justify their erratic measures].

It is unforgiveable if certain individuals and groups try to kill public hope, the president said, urging the governors-general to base their conduct on measures to help economic stability and growth, restore market calm, and encourage people to invest [in different sectors].

That the economy and centrifuges should spin together is a public demand, he said, adding the Cabinet will satisfy such a demand based on popular vote, the establishment’s core principles and [the country’s] red lines of which the nuclear team is fully aware.

Rouhani then took a swipe at those who use an indecent language when talking about Mohammad Javad Zarif and called his foreign minister “the Commander of the Diplomatic Front” and said, “Where on earth has this foul and indecent language come from? Do not tell lies to people. Those lies will be exposed [someday]. We need to talk to people honestly.”

“It seems God has descended His blessings everywhere; everybody around us has turned into an expert in law and national security, and into an eloquent orator who discusses national issues. This is a good happening,” he sarcastically said.

“How come certain people do not want to see people enjoy their lives when they see government is advancing nuclear talks with prudence and tactfulness? What is the secret behind the fact that there are some who are afraid of people’s smile? At issue is the nuclear case; it is not a question of this or that government branch or that of different parties. This is a nuclear case whose burden is on the shoulders of the establishment,” he further said.

The president went on to say, “The Supreme Leader offers a piece of advice since he has the stewardship of the country, but everybody starts advising the government ‘You are thirsty and should drink water’. Swear to God, we know we should drink water [in such a condition].”

Rouhani said his government has promised people to build an economy which – like the global economy – can experience reasonable fluctuations, adding, “We promised to help people be calm and relax. Like government, all institutes are accountable to people’s vote. That vote is not simply confined to executive organizations”.

He also said government has exploited all its potential to fulfill those promises, adding occasional failure comes with the territory. He stressed that his government’s attitudes are right.

“That people are not voracious to stock up on goods in their houses shows government is moving down the right path. That we did not have people stand in long humiliating lines shows that government has taken the right direction,” he emphasized.

“People do not criticize parliament and the Judiciary, saying let us lead our lives, but when it comes to blaming the president and his government, they never miss a beat,” he further said.

“It is our responsibility to make people happy and ease the burden weighing on their shoulders. In the nuclear case, how come government goes to great lengths [to settle the country’s dispute with the West] but it has to suffer the cruel taunts [of its opponents]? Why is it so?” the president asked.