What motivates an American woman to translate Iranian books on Sacred Defense? 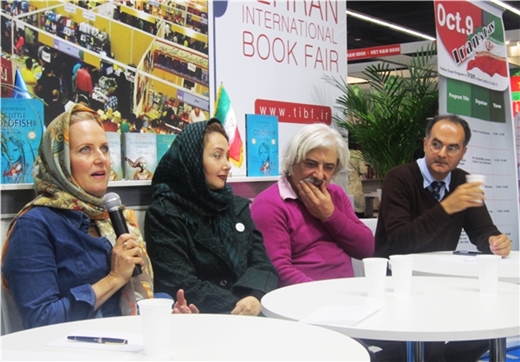 Croskery has recently translated a collection of short stories about the Iran-Iraq war by Ahmad Dehghan entitled A Vital Killing which is to be unveiled at the 2015 Frankfurt Book Fair.

Caroline Croskery, an orientalist and an American researcher at University of California at Los Angeles, has so far translated over 15 books by Iranian authors into English. Her latest translation is a collection of short stories on the Iran-Iraq War by Ahmad Dehghan.

The following are some of the books Croskery has translated: We Are All Sunflowers and A Heart Bigger Than the World by Erfan Nazarahari, Democracy or Demo-Crazy and In the Twinkling of an Eye by Seyyed Mehdi Shojaei, Red Fish by Katayoun Riahi, The Big Clay Jar and A Sweet Jam and one more title by Houshang Moradi Kermani and Stillness in a Storm by Saeed Ramezani. One book by Pejman Rahimzadeh and another by Afshin Yadollahi are also on the list of her translations.

The American translator who was present in the 27th and 28th editions of Tehran International Book Fair is a Farsi interpreter for the Los Angeles County Superior Courts.

She has recently translated a collection of short stories about the Sacred Defense by Ahmad Dehghan entitled A Vital Killing which is to be unveiled at the 2015 Frankfurt Book Fair in October.

The following is the translation of an interview with Ms. Croskery Tasnim News Agency published on September 28:

Ms. Croskery, you have recently translated a book entitled A Vital Killing by Ahmad Dehghan which is a collection of short stories about the Iran-Iraq war. Based on the experience you acquired from such translation, to what extent do you think the concept of Sacred Defense and the Iran-Iraq war as reflected in the Persian literature is appealing to American readers?

In the US where I live, whenever I talk with people about my translations from Farsi into English, they are amazed. A majority of them have a lot of questions about Iran and the Iranian people. They know that what Western media depict is not the whole truth and are eager to learn more about Iran.

That’s why I choose the books from a wide range of topics and titles by the best Iranian authors. My goal is to play an effective role in reintroducing Iran, its people and wonderful culture to the world.

What do you think about A Vital Killing?

I am extremely happy that I have translated a book by Ahmad Dehghan. I picked A Vital Killing for the title of the translated version; vital because it is necessary and at the same time life-saving. The collection of short stories paints a painful image of the disastrous impact of war on a country against the backdrop of the humanity of its people.

How must have found Iran’s war literature different and appealing to translate a book about it.

My personal intention of translating war books is to remind the world that Iran is a country with refined, noble and peace-loving people. The Iran-Iraq war was not merely a brief conflict between two unimportant countries; nor was it a product of Shiite-Sunni divisions. The public should bear in mind that it was an imposed war triggered by the interference in the internal affairs of a mighty country by major powers who sought to have a hold over the balance of power in the world. Such a policy still persists in the world and its wrongness is being proved.

The book by Ahmad Dehghan narrates stories that tell the truth about the Iranian people. Such stories show the power of people during war. The stories in the collection narrate human actions in a way which is comprehensible to everyone.

Do you adopt a special method in translating Iranian books into English? Given that your insight into the Iranian culture is gained through the books you translate, how do you translate?

I first read the book attentively, because I believe a translator should know the book inside out to be able to translate it. At times when it’s impossible to find an equivalent or there is no appropriate equivalent, I prefer to contact the author to appreciate the concept thoroughly. Then I add some explanations in the target language to convey the message.