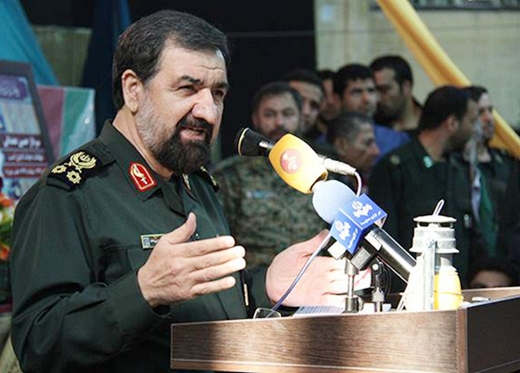 The secretary of the Expediency Council has said that the West seeks to shatter Muslim unity, adding that Iran’s stance is clear: geographical borders should not be changed and no country in the region should be disintegrated.

The secretary of the Expediency Council has said that the behavior of Takfiris [a reference to IS and other marauding terrorist groups in Iraq and Syria] is akin to that of the Zionists in occupied Palestine, adding that the footprints they leave behind is indicative of a plot they have hatched to block the progress of Muslims.

Mohsen Rezaei, who used to be the commander of the Islamic Revolution Guard Corps, made the comment in a gathering of the volunteer Basij forces in the Greater Tunb in the Persian Gulf on Thursday and added that the Americans have destabilized Syria and Iraq and displaced 15 million Muslims through Takfiri groups.

On November 27, Tabnak.ir covered Rezaei’s comments on Iran’s islands in the Persian Gulf, ties with the US, security and infiltration. The following is the translation of part of his remarks:

Iran and the Islamic Revolution

The Islamic Revolution put the Iranian nation, which was on the margins, front and center. This remarkable achievement identified Iran on the world stage as a big nation which holds sway in the region and around the globe. Today we Iranians decide on our own and get involved in global interactions proudly. […]

The three Iranian islands [of the Greater Tunb, Lesser Tunb and Abu Musa] remain part and parcel of Iranian territory forever. Historically, this is a question of great significance to Iran.

These three Iranian islands are the islands of peace and brotherhood. The enemies should know that Iran will blind those who set their sights on the foundations of this nation.  […]

Midway through the [Iraqi-imposed] war, I came to these islands with Martyr Sayyad Shirazi to review the situation in the region. Back then they were very impoverished. But today development in this island is remarkable and made me really happy. You [soldiers and Basij forces] are serving in a key strategic region. […]

Ties with US do not serve interests of Muslim world

[Addressing people and Basij members in Abu Musa], Major General Rezaei said, “The world of Islam does not benefit from ties with the United States.”

How has the establishment of ties with the Americans served the interests of Muslims? Through Takfiri groups, the Americans have destabilized Syria and Iraq, and displaced 15 million Muslims. What the Takfiris are doing [in the region] resembles the behavior of the Zionists in occupied Palestine. If you follow their footprints, you will realize that a plot is at play to stop Muslims from making further progress.

The formation of the 20 million-strong Basij Force by order of the late Imam Khomeini created a big change in the country. We proved that we could stand up on our feet and that Iran is not like what it was in the previous decades. Thanks to the Islamic Revolution, we toppled the shah, and during the war, we put the interests of colonial powers at stake and solidified the Revolution. […]

No change to geographical borders

The fake Israeli regime was created thanks to the open support of the West so that it can destabilize the region and the West can plunder the resources of the region, including those of the Muslim nations. They sought to take advantage of the situation by pitting Islamic nations against each other. They have resorted to such plots for almost 70 years.

These three islands which herald the call for unity, peace and brotherhood are described by certain countries as hotspots. These countries should know that Israel benefits from a destabilized region. In an insecure region, the riches of Muslims will be spent on buying arms.

The West also pursues another objective by targeting this region’s security: shattering Muslim unity. Don’t those who seek to redraw the regional map know that such policies are to the detriment of Muslims?

We say it explicitly that borders of countries should not be redrawn. No country in the region should be disintegrated. Our nation does not get frightened by their planes and fireworks. We have proved that we can defend ourselves and our homeland’s stability.

Iran, which serves as the anchor of security in the region, makes efforts toward regional security. We can band together with regional Islamic states to establish collective security cooperation to stop outsiders from entering Muslim nations and taking advantage [of their resources] under the pretext of ensuring security.

[Following the downing by Turkey of a Russian warplane] The two countries should show restraint to prevent a war from erupting in the region, because such a war would serve the interests of Zionism and terrorism.

The US and infiltration

The Americans once walked out the door [in this country] and now they are seeking to come in through the window, ostensibly for economic purposes. They are trying to infiltrate the country under the pretext of doing business in Iran.

We need to remain vigilant inside the country and beyond our national borders, especially in these three islands [in the Persian Gulf] and shatter such their pipe dream.