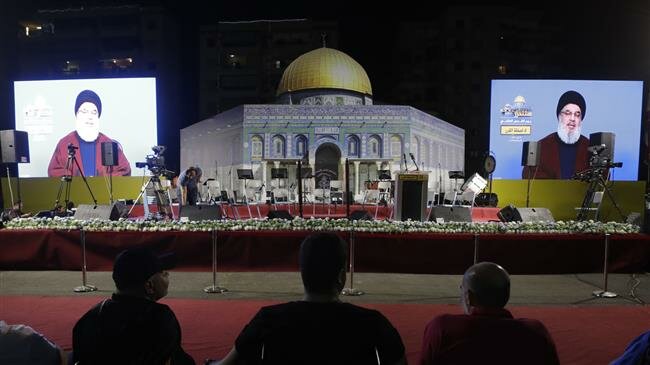 The secretary general of Lebanon's Hezbollah resistance movement has warned that a war against Iran would not stop at the Islamic Republic's borders, and its flames will engulf the entire Middle East region.

The rhetoric and threats of a war against Iran have ebbed because US President Donald “Trump, his administration, and his intelligence apparatus know well that any war on Iran will not remain confined to Iran’s borders,” Sayyed Hassan Nasrallah said in a Friday televised speech broadcast live from Beirut.

“All US forces and interests in the region will be exterminated and those who conspired (with them) will pay the price; first Israel, then Al Saud,” Nasrallah added.

In early May, the Trump administration announced plans to build up Washington’s military presence in the Middle East to counter unspecified Iranian “threats,” shortly after toughening oil sanctions against the Islamic Republic.

However, after several wars of words with Iranian officials over the past few weeks, Trump has gradually softened his tone, emphasizing that his country is not at all after a military conflict with Iran.

During a visit to Japan on Monday, Trump used a more conciliatory tone, saying the US was not seeking a regime change in Iran and that the Islamic Republic “has a chance to be a great country with the same leadership.”

Deal of the century a ‘historic crime’

In his Friday remarks, Nasrallah also slammed Trump’s so-called peace plan for the Middle East, and said what the US describes as the “deal of the century” is a “void deal” and a “historic crime”.

“This deal is a loss of Palestinian, Arab and Islamic rights,” Nasrallah said.

“It is a religious, moral, national and political obligation to oppose [the peace plan], since this is a deal that is unjust and is contrary to the rights of the holy places.”

He said “the responsibility is clear; we must confront this deal, and we are capable of obstructing it.”

According to Nasrallah, the current situation shows that the plan is on its way to failure.

“The United States, Israel and other regimes in the region are working to implement the deal, alongside an axis that opposes it,” he explained. “There is a conflict between the two factions, and I hope we can prevent the historic crime that is liable to occur in our land.”

Nasrallah also highlighted the military capabilities of the resistance front against the Israeli regime, saying, “The Palestinian resistance today is hitting Tel Aviv and what is beyond it, and it is capable of hitting all the Zionist settlements.”

He said the Lebanese Hezbollah also has enough precision-guided missiles to “change the face of the region.”

“We have in Lebanon precision rockets that are able to target certain posts in Israel and that would change the face of the region,” he said, adding that the resistance movement would respond to any Israeli aggression on any resistance target in Lebanon “quickly, directly and strongly”.