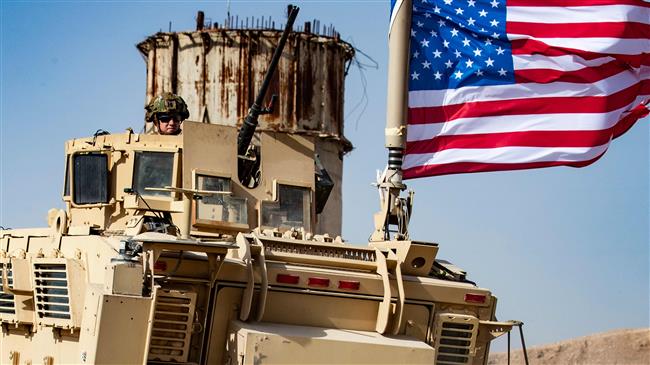 US Defense Secretary Mark Esper says all of the American troops pulling out of northeastern Syria will move to western Iraq.

“The US withdrawal continues apace from northeastern Syria… we’re talking weeks not days,” Esper told reporters en route to the Middle East late on Saturday, noting that the process is being conducted via aircraft and ground convoys.

He also put the number of US forces moving to Iraq at about 1,000, saying, “The current game plan is for those forces to re-position into western Iraq.”

In a major U-turn in the US military policy, the White House announced on October 6 that the US would be withdrawing its forces from northeastern Syria, clearing the path for an expected Turkish incursion into the region.

Three days later, Turkey launched the offensive with the aim of purging the northern Syrian regions near its border of US-backed Kurdish militants, whom it views as terrorists linked to local autonomy-seeking militants of the Kurdistan Workers’ Party (PKK).

Esper claimed that the US troops going into Iraq will have two missions, including helping “defend Iraq” and performing an alleged campaign against the Daesh terrorist group.

“Things could change between now and whenever we complete the withdrawal, but that’s the game plan right now,” he said.

The Pentagon chief further stressed that he had spoken with his Iraqi counterpart about the US plan.

The additional troops are expected to add to the more than 5,000 American troops already based in Iraq.

Elsewhere in his remarks, Esper said he will discuss with other NATO allies at a meeting next week the way ahead for what he called the counter-Daesh mission.

On Thursday, Ankara agreed to pause its incursion into Syria for 120 hours while the US facilitates the withdrawal of Kurdish militants from a 20-mile safe zone along the Syrian-Turkish border.

The Pentagon chief said that the US-brokered truce in northeastern Syria was generally holding.

“I think overall the ceasefire generally seems to be holding, we see a stabilization of the lines, if you will, on the ground, and we do get reports of intermittent fires, this and that, that doesn’t surprise me necessarily,” he said.

Esper also claimed that the United States was still in contact with Kurdish YPG militants and that they appeared to continue to defend the prisons in northeastern Syria.

US should use ‘leverage’ with Kurdish militants: Turkey

On Saturday, Ibrahim Kalin, spokesman for Turkish President Recep Tayyip Erdogan, urged Washington to use its “leverage” with Syria Kurdish militants to ensure their pullout under the ceasefire deal.

“Within five days they are supposed to leave and we have told our American colleagues to use their leverage, their connections to make sure that they leave without any incidents,” Kalin told AFP in an interview in Istanbul

He also emphasized that Turkey has been sticking to its end of the truce agreement.

“Since we reached this agreement with the American delegation, we have been committed to this deal,” he said. “Our president has ordered our troops to maintain their positions and not engage anybody.”

Ankara has no intention of “occupying” any part of Syria or “staying there indefinitely,” he said, ensuring that there would be no forced return of Syrian refugees to the planned safe zone in the Arab country.

The Turkish official also ruled out any direct contacts with the Damascus government and said, “We have no dealings with the regime at this point. We do this through the Russians.”

Kalin further accused Kurdish militants of using Daesh prisoners as a “bargaining chip in this dirty war” by deliberately freeing them in an act of “blackmail basically to garner support from the West.”