US Source of Tension and Insecurity in Region: Iranian Commander 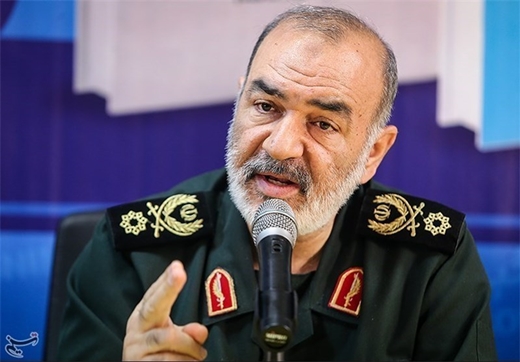 Lieutenant Commander of the Islamic Revolution Guards Corps (IRGC) Brigadier General Hossein Salami denounced the US as the cause of instability and tension in the region, saying Iran will boost its naval power to confront its only enemy in the region, namely the US.

“The US (military) presence (in the Persian Gulf) definitely fuels insecurity,” the top commander said on a television talk show on Tuesday night, May 3, hitting back at Washington which accuses Iran of destabilizing the region.

“Do we create tension or is it the Americans, who have brought about instability in countries across the whole region?” he asked.

The commander then underscored that Iran’s naval power and defense strategy have turned the Persian Gulf into a safe, strategic region for the world.

He explained that the IRGC has built up its naval power with the aim of defeating big military powers like the US, because “We have no enemy in this region but the US.”

The top general also reasserted Iran’s right to hold military war games in the region, stressing, “No other power or country can decide about our deterrent, defensive war games.”