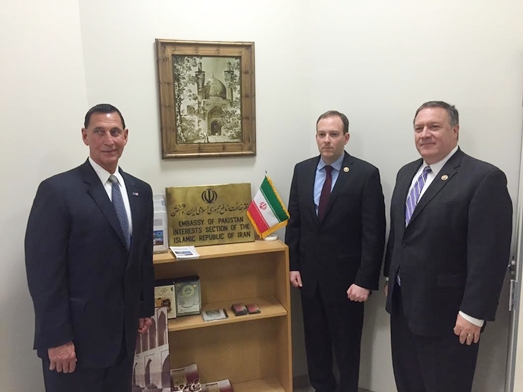 Three US congressmen whose requests for visas to visit Iran were rejected by the Iranian Foreign Ministry wrote three separate letters in reply to a letter from the office of Iranian FM Mohammad Javad Zarif, which noted that Congressmen do not get to dictate the policies of other sovereign countries.

According to IFP’s coverage of a report by Fars, US Representatives Mike Pompeo, Lee Zeldin and Frank LoBiondo went to Iran’s Interest Section in the embassy of Pakistan in Washington back in February to call for visas to visit Iran, saying they wanted to investigate what was happening after the nuclear deal between Tehran and world powers.

The congressmen were looking to make a fact-finding trip to examine Iran’s nuclear program, the status of American hostages, and verify that Iran was holding free and fair elections.

In reply, Foreign Minister Zarif’s office released a letter on Tuesday June 7, in which the US Congressmen were reminded that Congress is not a global authority, and only the International Atomic Energy Agency (IAEA) is competent in terms of monitoring JCPOA [nuclear deal] implementation.

The letter also described their move as a “publicity stunt”, and stressed that their demand to visit Iran had been made in a “completely inappropriate way”.

In reaction to the letter, Pompeo, a Kansas Republican and member of the House Permanent Select Committee on Intelligence, wrote:

“This absurd letter from the Iranian Foreign Ministry is unsigned, months overdue, and refers to our request for visas to travel to Iran as a ‘publicity stunt.’ It is not responsive to our request, and is an attempt to distract from some of the Ayatollah’s far more dramatic ‘publicity stunts’ such as writing ‘Israel must be wiped out’ on ballistic missiles, plotting to blow up a restaurant in Washington, D.C., and kidnapping American sailors on the day of the State of the Union. Our request was never a publicity stunt. It was, and remains, a serious attempt to accomplish important tasks for the American people. I ask the government of Iran yet again, grant our request for a visa.”

LoBiondo, a New Jersey Republican and also a member of the House Permanent Select Committee on Intelligence, stated:

“It is deeply disappointing, though not surprising, Iran would respond to our legitimate request with insults and deflections. As predicted, in denying our visa request Iran reaffirms that President Obama’s ‘new era of openness and cooperation,’ as sold to the American people and the world, is a farce. Our resolve to ask critical questions and conduct the vigorous oversight required in dealing with Iran will continue despite this decision.”

“While not surprised at this reaction from a Ministry-level entity within the Iranian government, like the JCPOA, this letter is an unsigned document that spits in the face of the freedom-loving world. This shameful response dodges almost all the inquiries of our letter, because they fear the consequences of honesty. The Iranians may have President Obama and Secretary Kerry wrapped around their fingers and toes, but January 2017 will be here soon enough. Iran is the world’s largest state sponsor of terrorism and this letter from [Iranian foreign minister Javad] Zarif’s office is a glaring reminder that they should be treated as such. It’s really too bad that they go so far out of their way to prevent a democracy from flourishing in their own country, because they know well that they would finally be replaced by leaders who want to empower their people rather than themselves and want to lead Iran to better days ahead instead of violently downhill. Inside of Iran are millions of great people who understand that while Obama and Kerry prop up the wrong regime, one opportunity after another is being missed to replace these Iranian thugs with true leaders and peaceful actors.”

To read the Foreign Ministry’s letter to the US Congressmen in full, click here.