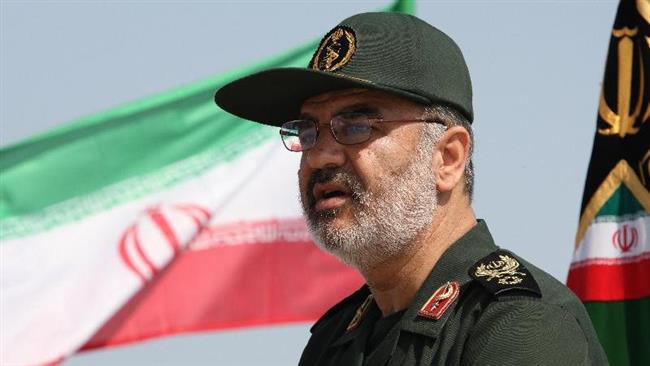 An IRGC commander has said that Washington’s recourse to the path of diplomacy shows the failure of its sanctions strategy.

A senior Iranian commander says the Islamic Republic has frustrated the schemes of the United States and its allies in the Middle East, adding that Tehran is turning into a major international power.

Brigadier General Hossein Salami, the second-in-command of the Islamic Revolution Guards Corps (IRGC), made the remarks at gathering in the northeastern Iranian city of Mashhad on Wednesday.

Salami slammed the 1953 US-led coup against the government of democratically-elected Prime Minister Mohammad Mosaddeq, saying Iran’s 1979 Islamic Revolution changed the “balance of power” in the world, and the country is no more dependent on foreigners like in the past.

“Today, we are thwarting all allies of the United States in the region,” stressed the Iranian general.

In August 1953, the British and American intelligence agencies initiated a coup by the Iranian military, setting off a series of events, including riots in the streets of the capital, Tehran, which resulted in the overthrow and arrest of Mosaddeq.

Six decades after the notorious coup, the US spy agency CIA for the first time published a document in August 2013 which confirmed Washington’s role in the coup d’état.

Salami further pointed to Washington’s efforts to bring the nuclear talks with Iran to fruition, saying the White House would never opt for diplomacy should it find weakness in a country.

Washington’s recourse to “the path of diplomacy” shows the failure of its “sanctions strategy,” he added.

The US uses military measures to deal with other countries, the Iranian commander said, adding that the country, however, does not make such a move in the case of Iran as Washington is well aware of the Islamic Republic’s might.

On July 14, Iran and P5+1 reached a historic agreement, dubbed the Joint Comprehensive Plan of Action (JCPOA), which is aimed at ending years of Western standoff with Tehran over the latter’s nuclear activities.