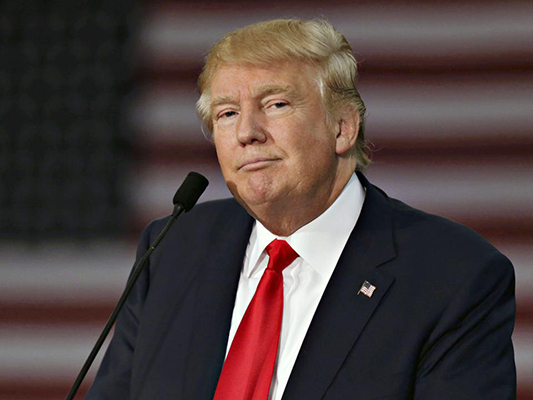 The US president is seeking to cash in on the recent protests in some Iranian cities to stop waiving sanctions and to withdraw from the JCPOA.

The Persian-language E’temad newspaper has, in an article written by Sara Masoumi, weighed in on the US president’s meddlesome remarks about the recent unrest and his possible plan for the nuclear deal signed between Iran and six world powers known as the Joint Comprehensive Plan of Action (JCPOA). The Highlights of the analytical piece follow.

US Seeking to Build Int’l Consensus against Iran

“We will not remain silent” is the sentence uttered by US Ambassador to the UN Nikki Haley about the recent unrest in Iran during her first speech in the year 2018. Haley’s sentence somehow makes sense. The Trump administration, which turns one year old in 16 days’ time, has expressed its viewpoints about everything so far. By expressing its views, the US administration has disrupted the relative international order, made its European allies worried, and reneged on many of Washington’s international commitments.

Haley has turned into the United States’ tension-creating commander. Washington’s stances, which must be naturally expressed by the US secretary of state, are declared by Haley. Over the past year, she has been handling the job of provoking as much tension as she can in Tehran-Washington relations. She has made fiery speeches at the UN Security Council about Iran’s missile tests and regional activities, visited Vienna to persuade the International Atomic Energy Agency (IAEA) to get tough on Tehran within the framework of the JCPOA, displayed parts of the missiles that Saudi Arabia has given to Washington and claimed they are parts of Iranian-made missiles in order to build a global consensus against Tehran. (Translator’s note: Haley claimed recently that the missile(s) fired by Yemen against Riyadh in retaliation for Saudi airstrikes against innocent Yemenis had been manufactured by Iran.)

The Trump administration has marked the arrival of the Christian New Year with back-to-back anti-Iran tweets by the US president as well as the unfounded speeches by its UN envoy. In her recent speech, Haley announced that Washington is asking the United Nations’ Security Council and Human Rights Council to hold an emergency meeting to review the recent developments in Iran. Such remarks are a clear example of interference in the internal affairs of an independent country which is a member of the United Nations.

Donald Trump posts one tweet a day, on average, in support of what he calls Iranian people’s uprising, and the important point is the comments posted under his tweets. Apart from Iranian users both inside and outside Iran, who want the US president to stop meddling in Iran’s domestic affairs, there have been many American users who have reminded him that he’d better busy himself with America’s internal problems and that he’d better remember the insulting comments he made to his own people when he speaks of respecting Iranians.

Not to mention the arguments going on in the United States between advocates and opponents of Washington’s interference in Iran’s recent developments, the leaders of other countries also have misgivings over Trump’s continual meddling in Iran’s domestic affairs and its impact on the events in Iran. Without having entered the blame-sharing stage in Iran’s developments, the Europeans are asking Tehran to give protesters the right of freedom of expression and avoid using violence against them. This is while Washington is turning the recent events in Iran into a pretext to ratchet up the pressure on Iran.

Regional countries also prefer to remain silent. Of course, Russia and Turkey insist that there must not be any interference in Iran’s domestic affairs. Russian Foreign Ministry Spokeswoman Maria Zakharova showed the strongest reaction to the different positions adopted by different US authorities. Touching upon Haley’s request that the UN Security Council hold an emergency meeting on Iran, Zakharova said, “There is no doubt that the US delegation [to the UN] has something to tell the world.”

“For example, Nikki Haley can share America’s experience in breaking up protests, going into detail about how, say, the mass arrests and the stifling of the Occupy Wall Street movement happened or how Ferguson was ‘quelled,’” Zakharova added.

Since Zakharova made those comments, Turkish officials have increased their contacts with their Iranian counterparts as well. Turkish Foreign Minister Mevlut Cavusoglu has talked to his opposite number Mohammad Javad Zarif of Iran about the recent developments. Turkish President Recep Tayyip Erdogan has also talked to his Iranian counterpart Hassan Rouhani about unrest in some Iranian cities. In the phone conversation, Erdogan expressed his support for Rouhani, saying the existence of stability and security in Iran is very important to Turkey. Erdogan also said he backs Rouhani’s statement that Iranian people must not violate regulations while expressing their objections over the existing problems in the country.

Cherishing the Dream of Regime Change in Iran

An opportunity for regime change or a tool to withdraw from the JCPOA by resorting to the strategy of not extending the suspension of enforcing nuclear sanctions against Iran? Some analysts believe Trump is seeking to seize the opportunity to implement his plan to bring about a regime change in Iran. The plan can also be seen in his comprehensive policy on Tehran announced two months ago. However, probably the major concern about the US president’s policies in the short run would be the extreme positions adopted in recent days on the JCPOA. Mid-January is a critical and determining date for the JCPOA. If Trump fails to maintain the suspension of nuclear sanctions on Iran, it will trigger Washington’s pullout from the nuclear deal, and Iran, too, can resume its nuclear activities as stipulated in the JCPOA.

Over the past week, Washington has left no stone unturned to further interfere in Iran’s affairs: threatening to slap sanctions on Tehran, to bring Iran’s dossier to the UN Security Council and the world body’s Human Rights Council, and not to extend the suspension of nuclear sanctions on Iran. Trump’s idea of seizing the chance to invest in the scenario of regime change in Iran began with his first interventionist tweet as covered by international media. Of course, the direction of the tweets and positions adopted by Washington increase the possibility of such a scenario. As a case in point, the American Free Beacon media outlet has, in a recent analytical piece, written that the reason behind Washington’s closely watching the developments in Iran and Trump’s adopting a position on them is that the US president feels he has grasped a good opportunity to support the recent protests in Iran one way or another and can further fuel them. Still, individuals such as John Brennan, who used to be the CIA director in the Obama administration, have lashed out at Trump’s policies on the recent developments in Iran and believe that even if the unrest in Tehran could have strengthened the position of reformists and brought about gradual political reforms, Trump killed that chance with his blatant interference. Brennan has openly criticized Trump these days and stressed that sabre-rattling can be neither a strategy nor a mechanism to reinforce the United States’ power and leverage.

Trump Gets Pretext He Needed

Politico and the CNN are two media outlets which have, over the past 48 hours, published analyses about the impact of Iran’s developments on Trump’s decision about the JCPOA. According to Politico, the opponents of Trump’s resorting to the recent developments in Tehran to stop waiving nuclear sanctions against Iran believe such a move by Trump will be in Iran’s interest at the end of the day. Despite all the destructive measures adopted by the US president against Iran over the past few days, the greatest danger looms large within the 120-day period when Trump has to decide whether or not to continue waiving Iran sanctions.

Less than two weeks are left until that day, and whatever action the US president takes has a high risk of scuttling the JCPOA. Although national security advisors to Trump have strongly reminded him that the US would not be able to handle the high costs of withdrawing from the JCPOA, Trump seems to be cherishing the idea of putting more economic pressure on Iranian people in order to be able to incite them against the government.

According to Richard Goldberg, Trump will stop waiving nuclear sanctions against Iran in mid-January as it will keep money flowing to the Iranian government, make the Iranians benefit more from the JCPOA and secure the survival of the Islamic Republic establishment in the country.

Politico quotes a senior analyst as saying that Trump believes he can seize the moment, and hence, he will re-impose nuclear sanctions on Iran. Trump is of the conviction that the Iranian government is facing enough economic problems, and Iranian people will come under more pressure if nuclear sanctions are reinstated. According to Politico, many experts on Middle East issues as well as former US authorities have warned that withdrawal from the nuclear deal with Iran will further rally people behind the government. This comes as the other five signatories to the JCPOA are standing behind Iran in this scenario.

Dennis Ross, an advisor to three former American presidents on Middle East affairs, believes Washington should not pull out of the JCPOA.

“It basically diverts attention back onto us. We have an interest in keeping the spotlight on what the Iranians are doing, not shifting it to a step that we took,” he said.

In the meantime, an official close to the White House says at a time some Iranian cities are the scene of protests

Trump has been calling for a review of the JCPOA over the past year, a demand rejected by Iran and other signatories to the deal. Europeans have, time and again, called on Trump over the past year to stop threatening to pull out of the nuclear deal. The Europeans say the reinstatement of nuclear sanctions on Iran can prove the claim that the US is not a reliable player in any deal. By refusing to confirm Iran’s commitment to its obligations under the JCPOA, Trump has shown that he needs no documents for his behaviour, so much so that he can deny Iran’s compliance with the JCPOA despite the fact that the IAEA has, on several occasions, corroborated Iran’s abidance by the deal.