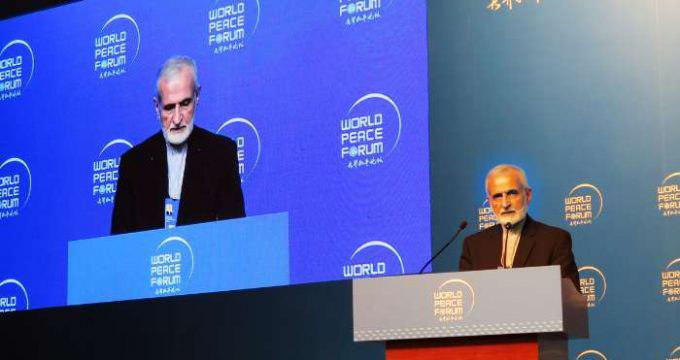 A senior Iranian politician and a former foreign minister says US President Donald Trump is following in the footsteps of his predecessor George W. Bush in the Middle East.

Kamal Kharrazi, the Head of Iran’s Strategic Council on Foreign Relations, said Trump has adopted the same policies of George W. Bush in the Middle East, creating instability in the region.

Addressing a press conference on the sidelines of the Sixth World Peace Forum held in the Chinese capital, Beijing, Kharrazi also said the US is not a reliable partner as the country has shown that it does not remain faithful to its commitments towards other states.

“The US says you are either with us or against us. That’s why we are witnessing the US and its regional ally, Saudi Arabia, meddling in the internal affairs of some regional states like Yemen,” he said.

Kharrazi strongly condemned Saudi Arabia’s airstrikes on the innocent civilians including women and children in Yemen and said Yemen’s problem will not be resolved by targeting civilians and Yemenis themselves should decide for their country.

The Iranian official referred to the latest diplomatic crisis between Saudi Arabia and Qatar and said Riyadh has decided to cut its relations with Doha because of Qataris’ support for the Palestinians.

Saudi Arabia and a number of its regional allies including Egypt and Bahrain cut their diplomatic ties with Qatar for what they called Doha’s support for terrorism. So far, any mediatory efforts between the two sides have ended up in failure.

“Our policy has always been based on the principle of resolving problems through diplomatic channels. So, we hope that the two sides could settle their woes through talks,” he said.

He also blamed some regional states’ anti-democratic policies for the current growing terrorism in the Middle East.

The Iranian official dismissed as nonsense the accusations made by the US and Saudi Arabia against Iran for creating instability in the region and said Iran has created stability in Iraq and Syria through its war on terror.

He said Iran is a victim of terrorism and added the US and its regional allies have always supported terrorist groups.

“As we see, such terrorist groups as ISIS have been provided with financial and weaponry support by the US and its allies over the past years to fight against Syrian government,” he noted.

He also said Iran, Russia and China have adopted a similar approach towards Syria war and added the three countries never accept foreign interference in the war-torn country.