Top MP: Iran is growing at a fast pace 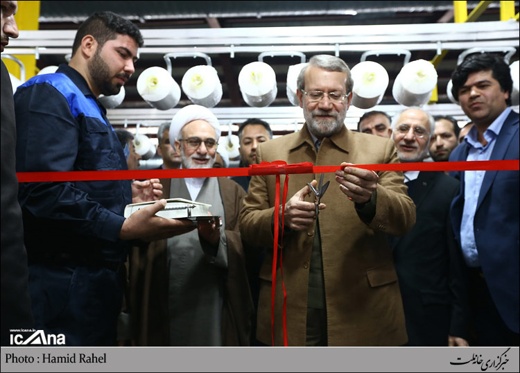 Parliament Speaker Ali Larijani has said Iran is growing rapidly, but it needs to give momentum to its production sector to move forward even faster.

The speaker of the Islamic Consultative Assembly says that the lack of working capital is one of the challenges the country’s production sector is facing.

Ali Larijani made the remarks in a ceremony Monday to open Atrin Nakh Qom Company in Qom. The following is a partial translation of a report the Islamic Students News Agency filed on the top MP’s remarks there:

The Islamic Revolution brought about development for Iran from many aspects. The enlightenment the revolution has caused has manifested itself in Iran and some other countries.

Despite enemy attempts to downplay the achievements of the revolution, the Iranian nation has gained a lot of experience.

Iranian youth have commanded sophisticated technologies. The Supreme Leader paid special attention to domestic production on all fronts during his inspection tour of a nanotechnology exhibition [a few days ago].

The country had not done much in the steel industry before the revolution, but after the revolution steel and petrochemical products accounted for the bulk of Iran’s non-oil exports.

This is not enough. To make still more progress, the country needs to take a leap.

Proposals by economists are needed in order to make optimal use of the production sector. The industry sector in Qom province needs to attract more investment. If so, more jobs will be created and unemployment will be beaten.

The province’s agriculture is limited, so its industry and tourism sectors should be boosted.

The prospect is bright for Iran. During one of my recent foreign trips, a regional leader told me, ‘The speed of Iran’s development is like that of a missile.’ It may sound exaggerated, but one can say that Iran is growing at a satisfactory pace thanks to its human resources.