The Life of a Syrian Family in Tehran 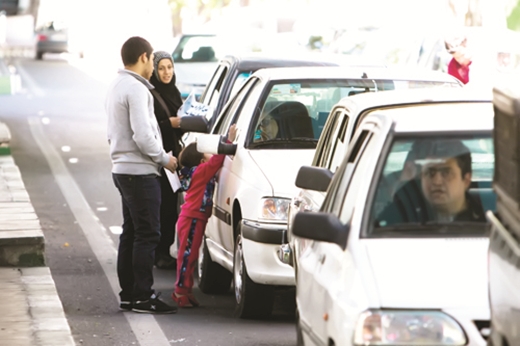 He’s holding a folded piece of paper in one hand, while with the other gripping the hand of a little girl. He passes the paper to the taxi driver’s window, then bends his neck a bit without saying a word. It’s noon under Hafez Bridge in Tehran. A soft breeze blows and there’s no sign of heat yet.

Shahrvand continues: The driver reads the paper, “I’m a homeless Syrian. I ask for help from you Muslims.” The driver reaches out and puts a note in Hassun’s hand. Hassun is young. He’s got curly hair and his first tufts of facial hair. He nods his head in thanks, then moves toward another car. The young girl has her hair tied up, and her ice-cream is dripping on the street’s asphalt and her shoes. Alif is his sister. He turns his head and notices me. He speaks no Farsi. I speak Arabic with him. I ask, “Where are you from, Syria?” In a Syrian accent he says, “Yes.”

Where did you come from in Syria?

When did you come? How?

How did you enter Iran? Weren’t you stopped by police?

–  We were in Turkey first. We had lost everything in the war. Our houses were destroyed and we had nowhere to live. So we went to Turkey and stayed there for a couple of months. No one could understand us there though, and everything was very expensive. Life was getting very difficult there. A relative who lives in Iran suggested that we come here. We were told that Iran is a Muslim country, where they would sympathize with us and help us, so we came here. We came by bus. It took us two days. The police didn’t stop us at all. We even got legal stamps in our passports, but all our relatives are still in Turkey.

You then directly came to Tehran?

Where do you live now?

–  When we arrived in Tehran, they told us to go to one of the pilgrimage areas. We did, and rented a place there for $15 a night.

Where are your family members, your parents?

–  My father is sick. He has diabetes. My mother was killed in the war. I live in the same place with my six sisters, my brother and his family. My sisters and brother are also around. We beg  for money and help in the streets. We came with no money at all. We must take care of our basic expenses.

Can you earn enough to take care of your basic expenses?

–   Sometimes yes, and sometimes no. Our situation has got worse since we came to Tehran. We are looking for proper jobs and a proper place to live.

Aren’t you worried for your sisters in a strange country? They speak no Farsi either.

–  No, God will keep them safe. Plus, we have no other choice.

How did you choose Hafez Street? Your relatives told you about it?

–  We chose it randomly. Our relatives didn’t help us at all.

Do you know the name of the street at all?

–  No, I just know that that place is called Aladdin.

Hassun is 13. Alif stretches her arms out for Hassun to take her in his arms. He speaks no Farsi, neither him nor his sisters who are spread out across the streets asking for help among the cars, holding the same folded paper. The note was written by a Mullah for them. He explains,” I was in the mosque doing my prayers when I saw the mullah. I asked him to write something for me so that people would help us, and he did.”

Their condition is not very good. It takes them an hour every day to get here: him, his sisters, his brother and sister-in-law all agree, saying “This is not a good life. Our job is not good. We are ashamed to do it and beg from people. Many don’t help at all.”

I ask him about their experience in Iran. “Iran is a good place but we are strangers here. No-one understands our language here,” he says.

Are there other people like you apart from your family?

–  Yes, there are many Syrian families. They are all in a bad condition. War has made us destitute. We have nothing.

How was your life in Aleppo?

–   We had a good, happy life, but we lost everything after the war.

Have you tried to get any help from the Syrian Embassy or anywhere else?

–   No we didn’t. We only spoke to the Turkish embassy, where they told us we need to apply for a visa if we want to go back there.

We are busy talking when Nesrim arrives, a thin girl wearing Arabic dress and a black shawl. Her little eyes are shining in her tanned face. She doesn’t look 20 at all. She’s Hessun’s sister-in-law. She speaks no Farsi either, “For God’s sake help us. I have a little girl. I want to buy diapers for her.”

I’ll take some out of my pocket and give it to her, “We just came from Syria. We’re looking for a place to rent. We came with Hessun’s family.” I ask, “Where is your family?”

“They are all in Turkey. We didn’t stay. It was very difficult there. The Turkish government would only give us food. We needed jobs and a place to stay.”

The shopkeepers around Hafez Bridge know them well, since they have been working there for the last three weeks. Every day at noon, they all go to the street food counters and beg for food. Around 2 or 3pm, they all gather together and leave.

One of the shopkeepers says, “There are 5 or 6 of them I guess. There are some boys and an older one, a 20-year-old girl, too.” He continues, “We sometimes help them, but we can’t do it every day.”

There are a few kids a few metres away on the pavement holding glass spray and cloths. They are the Syrian’s competitors, “They don’t sell anything here, they just beg,” one of them says. The other one continues, “Most of them are around the Bazaar, Naser Khosrow or Marvi Alley.”

I walk toward Marvi Alley – not that far. The alley is getting less crowded in the afternoon of the first day of the week. There are a few labourers sitting on the side of the pavement. One of them says, “They are everywhere. They are increasing in number. Once I asked them where were they from, and they said Syria.” A shopkeeper says, “They come to us regularly. Sometimes we help them. I hope they do something about them.”  Another one says, “They are not always around. They usually come here around midday.”