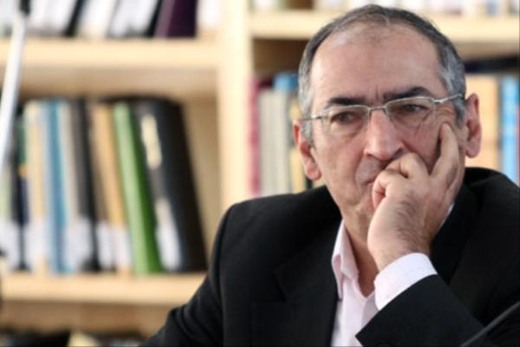 Sadegh Zibakalam, in an opinion piece, explains why Iran’s hardliners are not happy with what has been achieved in Switzerland after intensive nuclear talks.

Sadegh Zibakalam, a university professor and political analyst, says the fact that Iranians eagerly followed the news on nuclear talks in Switzerland rightfully demonstrated political solidarity between the Iranian people and government.

Sahrq daily on April 5 published an opinion piece by Zibakalam on solidarity between the nation and government, and reactions by the hardline worriers. The following is a partial translation of the piece:

The passionate enthusiasm millions of Iranians showed during the Nowruz holiday to get the latest on nuclear talks – especially the round of negotiations which opened on March 26 in Lausanne, Switzerland [and led to the Lausanne statement] – was indicative, more than anything else, of solidarity between people and the government.

In recent years, one can hardly find a topic on which people and officials have developed so unanimous consensus. All sides were impatiently seeking to see the nuclear case – whose specter had haunted Iran for more than one decade – produce a definitive satisfactory result.

When words spread Thursday night that a preliminary agreement has been clinched [between Iran and P5+1], millions of Iranians heaved a sigh of relief. Although the details of the agreement had yet to be announced, Iranians – who had been waiting for months – learned that the talks had not ended inconclusively and parties [to the nuclear talks] had arrived at a preliminary agreement.

As a matter of course, not all people approve of the Lausanne agreement. A number of hardline figures – generally known as the Worriers [former President Ahmadinejad’s supporters who proclaim to be worried and keep sounding alarms about the state of affairs in the country since the rise to power of the moderate government of Hassan Rouhani] – did not welcome the agreement; neither did certain foreign figures and groups that are unhappy with the Islamic Republic.

The reason behind the failure by the Worriers to welcome the agreement differs from those of the Westerners. For the critics of nuclear agreement inside Iran, the nuclear dispute had turned into part of [their] media hype about tensions with the West, but the agreement has [taken the wind out of their sails and] barred them from making [political] gains out of the nuclear case.

On the one hand, they are busy reviewing the provisions of the preliminary agreement in order to possibly point a finger at certain points which do not favor Iran’s interests and justify their opposition to the [framework] agreement.

On the other hand, the hardliners listen attentively to remarks by US and European officials to get a lot of mileage out of some of comments which are naturally made to instill a sense of victory for the West [into people in their own countries].

The point is that these groups look at any agreement or a win-win solution with disbelief. They do not want to accept that an agreement or a compromise is likely to come with some points which serve the interests of Iran, and at the same time include other points which are to the benefit of the other party. They just dig their heels in, saying everything should be to the advantage of Iran, or else it is to the detriment of Iran.

Iranian hardliners are also concerned that the nuclear agreement could open an “ominous” chapter in the country’s détente with the West. In any manner, if Iran and the West can reach an understanding over the protracted, acrimonious nuclear dispute, the logical question that arises here is: Why not reach an agreement over other bones of contention?

For many hardliners, what is more alarming than the [recent] nuclear agreement or certain provisions of that is the concern or apprehension associated with the possibility that the Lausanne agreement could mark the beginning of a new trend in Iran’s diplomacy.