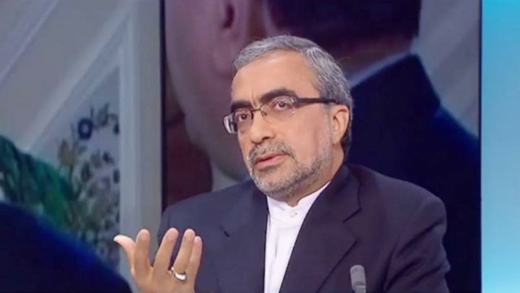 Iranian Ambassador to Paris Ali Ahani said Iran and Saudi Arabia are two major players in the Islamic World and the Middle East adding that their cooperation is essential to secure peace and stability in the region.

In an interview with France24 TV broadcast on Tuesday, he said Iran has always pursued friendly relations with other countris because its national interests require joint cooperation whereas Saudi Arabia is after tension.
About Iran’s presence in the region as a key player including in Iraq and Syria, he said, ‘When they ask for our defense assistance, we are completely ready to help them because the future of the people of Syria and Iraq and their countries should be considered.’
He said Iran has been skeptical about the Western-led coalition against terrorism in the region and added that fighting against the menace of terrorism demands good-will and a serious determination.
Ahani said that President Hassan Rouhani in recent meeting with his French counterpart expressed Iran’s readiness for cooperation with France in the joint fight against terrorism because it is a global threat.
The Iranian envoy stressed that terrorism in Syria has to be curbed and eradicated adding that Iran supports a political solution to the Syrian crisis.
Regarding the upcoming parliamentary elections in Iran, he said that Iranians can express their voice through democratic means.
Ahani also said that majority of executions in Iran have been related to drugs-related convictions because the country is used as a transit route to smuggle narcotics from Afghanistan to Europe.