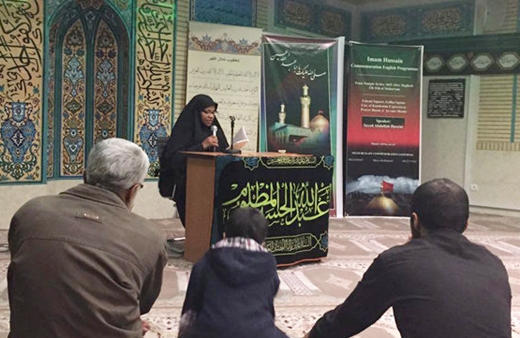 An English-speaking group of believers in Tehran says it aims to bring Tehran-based foreigners together and wishes to set up an English Islamic training center in Iran.

The Iranian capital is a metropolis of around ten million. People originally from other cities account for a big chunk of Tehran’s population. Those who move into the capital stick to the traditions of their hometowns when observing religious rites and rituals, especially in mourning ceremonies for Imam Hussein (PBUH) – the grandson of the Prophet Muhammad and the third Shiite Imam – in Muharram.

“Mourning ceremonies for Imam Hussein (Peace be upon him) in English language each night after first evening prayers with Tehran-based English speakers and students of the English language in attendance….” This was part of a text which changed hands on social networking sites like Telegram and WhatsApp and aroused the curiosity of Mehr News Agency’s Azadeh Bagheri, compelling her to pay a visit to the site.

Marzieh Hashemi, an American-born Iranian TV presenter, journalist, and documentarian and the host of Press TV, is the founder of this small group. Two years ago, she launched the group by holding Dua Kumayl (Supplication of Kumayl) on Thursdays. She and other members of the group are trying to introduce the group to people and bring together foreign Muslims who are based in Iran to ease their homesickness.

The following is the translation of part of a report Mehr News Agency released in late October on the activities of this English-speaking group and its objectives as well as comments of Marzieh Hashemi and Behrouz Alipour, who are active members of the group:

A group, low in quantity but high in quality

Eyvan Shams was not much crowded, but the get-together of the few people there was too attractive to be ignored. This group is different because its every single member has made a personal decision to embrace Islam. Some are not Iranian; those who are have been away from their homeland for years. They get together and hold mourning ceremonies in a language which sounds more familiar to them: English.

Behrouz Alipour, one of the group’s active members, has been with the group ever since it was formed two years ago. Alipour, who has a B.A in Islamic art and an M.A in political science, says, “The Dua Kumayl group, which is an English speaking group, was formed by Ms. Marzieh Hashemi whose real name is Melanie Franklin, and Messrs. Foad Izadi and Marandi. The group used to meet at the Faculty of World Studies in the University of Tehran. Back then those interested would gather at the faculty’s mosque on Thursdays to read Dua Kumayl.

“[…] Currently the group has 50 main members, but on some days a variable number of people, for instance up to 100, are present here.”

He says, “The group absorbed more members and people learned about it a bit after it held an Iftar [fast-breaking] ceremony in Mellat Park in Ramadan. […] Generally speaking, people warmly welcomed the ceremony. There were oppositions, but it produced a satisfactory result. That night we spread a table cloth in the park and everybody who was there joined us. We asked people to join us for Iftar. […] People asked where we were based. That was how contacts were established and the number of members increased until the month of Muharram started.”

He says that they launched a group on social networking sites such as WhatsApp and Telegram after being warmly welcomed by people. They wanted to see more people get familiar with this group. […]

We were denied a place because we were anti-American

The group has faced certain problems. It does not have a fixed place and has moved to different sites. Alipour says, “We wanted to stay in the university’s prayer room, but some issues came up and they did not want this anti-US group to remain in the Faculty of World Studies. On different grounds, we were told we had better not be there.

“So we went to the Faculty of Foreign Languages, but we had to leave that place for the same reason. Later we went to a building of the Supreme Leader’s Office on Zartosht Street. […] Now we want to change our place. For the first ten days of Muharram [this year] we were in the prayer room of Eyvan Shams.”

We aim to launch an Islamic training center in English

Alipour says that Iranian Muslims have limited contacts with fellow Muslims in other countries, adding that formation of such groups helps boost contacts between Muslims. “We intend to launch an Islamic center to help Muslims in Iran establish contacts with other Muslims outside Iran. I think Iran’s contact with the outside world is limited. If we can establish international contact through this group, it would be great.

“Our motto is that borders and races do not count. Some members of this group hold different programs; for instance, the New Horizon Conference which has been held for three years led by Mr. Nader Talebzadeh raises international questions focusing on tyranny and injustice, especially by the US. It aims to reveal the true colors of the United States where racism is clearly evident”.

He further says that the group aims to set up an Islamic training center in English. “Our major goal is to have a place for our members to receive training on Islam in English, because it is an international language by which we can transfer what we have to other societies. We want to hold courses and teach Islamic concepts. If we can have a place supervised by the Education Ministry and offer trainings authorized by the ministry, it would be great. There are similar cases outside Iran. It takes a long time to reach such a goal.”

It has always something to do with Marzieh Hashemi!

Marzieh Hashemi, the founder of the group, says, “I converted to Islam more than 30 years ago. In addition to Iran, I have had religious activities in the US. […] People came to Iran from the US and elsewhere in the world. They got deeply involved in their profession in Tehran and their activities became more personalized. They were no longer engaged in their previous activities. What a pity, I thought. I talked with a few people in this regard and I realized that we had to do something to bring those people together again. […]”

We help foreign Muslims with their homesickness

“[…] The foreigners who have come to Iran after embracing Islam are alone. We have to help ease their homesickness one way or another. I think the group we have formed can be very much helpful. Currently, we have focused our attention on Tehran. […]

The group is the foundation of an international gathering

[…] Hamidreza Gholamzadeh, who holds a B.A. in translation and an M.A. in American Studies, has been in contact with the group since its inception. He says, “[…] This is a small gathering with a big goal which acts as the foundation for a massive international gathering.”

Foad Izadi, who is among the founders of this group, has lived in the US for 23 years. He is now a professor at the Faculty of World Studies and teaches American Studies.

He says, “I knew Ms. Hashemi from many years ago. I saw she was so concerned about foreign Muslims in Iran trying to bring them together. Reading the Supplication of Kumayl was good enough reason to that end. Group members and I would eagerly follow her. We hope the current trend persists and the group can achieve its ultimate goal.”