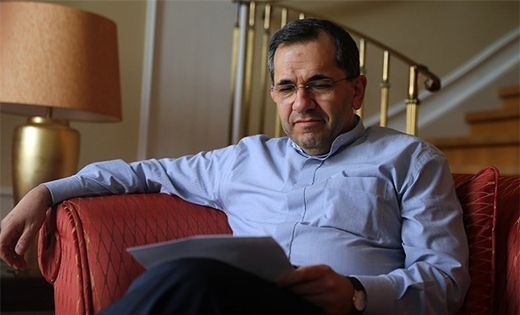 Iran’s Deputy Foreign Minister Majid Takht Ravanchi has stressed that counter-terrorism is one possible area for future cooperation between Tehran and Washington, but it is too soon to talk about such a matter.

Takht Ravanchi, who is responsible for European and American Affairs in the foreign ministry, helped to negotiate a comprehensive nuclear agreement between Iran and 5+1 (Russia, China, US, Britain, France, and Germany) announced in Vienna on July 14. In the aftermath of that accord – which he called a “new baby” – he laid out Iran’s view of relations with Washington.

Iran and the US will have “opportunities” for greater cooperation in tackling terrorism if the nuclear agreement is implemented successfully, Takht Ravanchi said in a Tuesday interview with The Telegraph in Tehran.

He stressed that it is “premature” to go into detail, but the struggle against terrorism was one possible area for future cooperation.

“For the future, it is premature to see whether there will be possibilities for Iran and the United States to work together on regional issues. First we have to see how this new baby, if I can say, can be brought up,” he said.

“If everything goes well in the implementation of the agreement, I think there will be opportunities. I cannot say now to what extent Iran can cooperate with the West.”

For now, Takht Ravanchi said the priority was to ensure the nuclear deal was “nurtured, protected, and supported.”

“Suppose that this matter is being implemented properly and over time the necessary confidence is built, there are opportunities – and first and foremost is over how to deal with this problem of terrorism and extremism,” he added.

Takht Ravanchi further said, “This is an issue which is not confined to a specific region, which is not related to only one country. So these are the opportunities that can be discussed, can be elaborated, between Iran and others in the future.”

As for the timing of any future cooperation with the US, Takht Ravanchi stressed how the progress of the nuclear agreement, officially known as the Joint Comprehensive Plan of Action (JCPOA), would be the decisive factor.

“It seems to us that we need four to five months before this JCPOA begins to be implemented. So we are talking about somewhere around six months to one year – and I think it is not really wise to talk about it now,” he said.

Takht Ravanchi stressed how the ISIL (Islamic State in Iraq and the Levant) “menace” transcended national boundaries. “This is an international threat and this needs an international response. We believe that all members of the international community should come together and try to address this problem.”

He also touched upon the recent war rhetoric by various US officials, saying that Iranians understand such remarks were “for domestic consumption”.

“Talking about the use of force is an empty threat and does not solve any problem. But we know they have difficulties back home, they have to address the concerns being raised in the Congress. As far as reaction to those comments in Iran is concerned, I think the Iranian people know these are not something they should really worry about,” he stressed.

“There is a bitter history between Iran and the United States. As I said, this nuclear deal can be the foundation for possible future interaction.”

Takhti Ravanchi’s remarks came as Supreme Leader of the Islamic Revolution Ayatollah Seyyed Ali Khamenei on April 9 made it clear that the talks with the US revolve only around the nuclear issue and nothing else, but at the same time noted that such nuclear negotiations provide an experience to test the possibility of talking on other subjects if Washington puts aside objections.

Takht Ravanchi referred to the opening of Iranian and British embassies, making it clear that both embassies would soon reopen.

“There are a number of issues which need to be resolved, but I think these are not difficult issues,” he said. “We have not discussed officially when that specific date should be, but I don’t think this is going to be a major problem.”

Philip Hammond, the British Foreign Secretary, suggested last week that Britain’s embassy in Tehran could reopen by December. For his part, Takht Ravanchi said, “I think we can do it even earlier, because these issues are not really serious issues.”

British Embassy in Tehran has been closed since 2011 after a group of angry Iranian students stormed the embassy and pulled down that country’s flag following Britain’s decision to impose sanctions on the Central Bank of Iran.

Following the incident, Britain withdrew its diplomatic staff from the country on November 30 and asked Iran’s diplomatic delegation in London to leave within 48 hours.