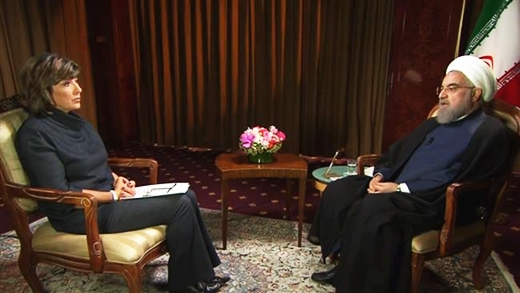 In an interview with CNN, Rouhani said Tehran will consider the release of three Americans held in Iran if the US frees Iranian prisoners.

Iranian President Hassan Rouhani says there is widespread agreement among countries that Syrian President Bashar al-Assad should remain in office.

Rouhani said in an interview with CNN on Sunday that “everyone has accepted” that President Assad must remain.

He added that the initial objective in Syria is to “drive out” the IS terrorists, which can only be done by strengthening the central government.

The president also said after levels of success are gained in defeating terrorists in Syria, “other plans must be put into action so as to hear the voices of the opposition as well.”

President Rouhani also stated that Iran was not engaged in talks with the US over the conflict in Syria. “Iran does not have any direct talks with the United States over Syria.”

Rouhani, who is currently in New York for the 70th Session of the United Nations General Assembly, said Tehran will consider the release of three Americans held in Iran if the US frees Iranian prisoners.

“If the Americans take the appropriate steps and set them free, certainly the right environment will be open and the right circumstances will be created for us to do everything within our power and our purview to bring about the swiftest freedom for the Americans held in Iran as well,” said Rouhani.

Questioning the reliability of US Republican candidates who are currently attacking Iran’s recent nuclear agreement with P5+1, the Iranian president said some of them could not even find Iran on the map.