Syria to Be Reconstructed with Help of Iran, Russia, China: Assad 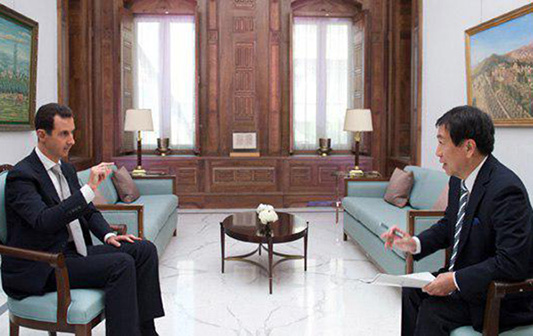 Syrian President says the country’s reconstruction will not be postponed until the end of the ongoing crisis, and Syrian people are building their country again with the help of their international friends.

“We have started before the end of the crisis, we put the plans and we started with suburbs around Damascus and now we are planning in Aleppo and other cities to reconstruct new suburbs that’s been destroyed, but in a modern way,” President Bashar al-Assad said in an interview with Japan’s TBS TV.

“So, we haven’t waited, and we are not going to wait till the end of the crisis; we can start right away, as the Syrian people are determined to rebuild their country.”

“We built Syria, Syria was not built by any foreigners; we built it with our engineers, with our labours, with our own resources, with the help of some friends – financial help, not technical help. So, we have the ability to rebuild Syria,” he went on to say, according to a report covered by Etemad newspaper in Farsi.

“It [the reconstruction] takes time because it needs a lot of money. The Syrians, every Syrian is going to build his own house according to his resources even if it is limited,” the Syrian president noted, adding that the reconstruction will be realized with the support of “our friends Russia, China, and Iran.”

“It’s not about time; it will take time. Any reconstruction will take time, but the most important thing is that you have the ability to rebuild your country. We are not worried about that.”