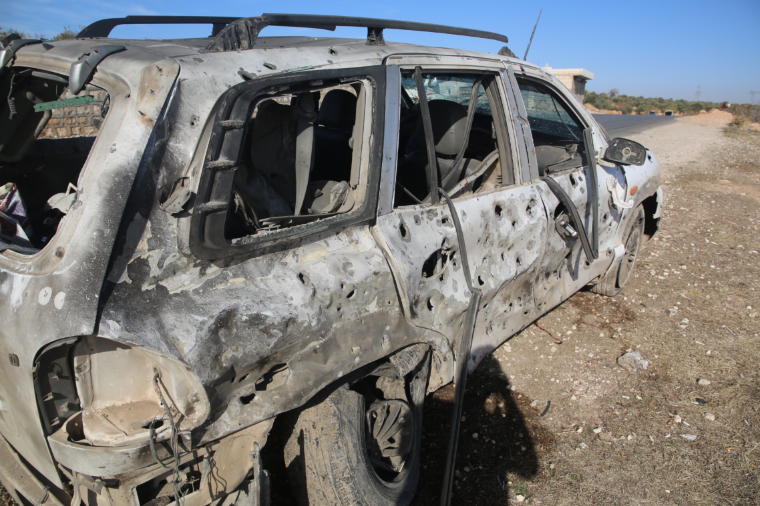 A Syrian man and his family members were among the civilians injured in the recent US drone attack in Idlib province. Doctors say the 10-year-old son of the six-member family may never fully recover from the wounds caused by the air raid.

Ahmed Qasoum’s 10-year-old son may never fully recover from the wounds caused by a US drone strike that hit an opposition stronghold in northwestern Syria on Friday, doctors said.

A MQ-9 Reaper drone struck a motorcycle driven by a senior al-Qaeda leader on a road between the cities of Ariha and Idlib that day around 10am, local time.

US Central Command, which heads all Pentagon missions in the Middle East, said the al-Qaeda leader had been successfully killed and admitted “the possibility” that civilians had also been wounded.

“We are initiating a full investigation of the allegations and will release the results when appropriate,” stated Captain Bill Urban in a statement.

Qasoum, 53, and six of his family members were among the civilians hurt in the attack as they drove down the road, unaware of who was on the motorcycle near them, or what was secretly flying overhead.

“The motorcycle was going in front of me and I decided to pass it, when I got parallel to it, I felt a lot of pressure pushing the car to the left of the road,” the father told Middle East Eye.

Photos sent to MEE showed the motorcycle had been ripped into a twisted scrap heap.

“It was horrible,” Qasoum continued, adding, “We didn’t hear any sound of the explosion. The shrapnel hit the left side of the car, tearing through that side, which acted as a sort of filter for a lot of it.”

“My 10-year-old son has had a fractured skull and is now in a very serious condition in the intensive care at a hospital in Idlib. Doctors have told me that he would have nerves problems on his right side in the future,” Qasoum noted, speaking to MEE via WhatsApp.

“My 15-year-old daughter also suffered serious wounds to her head,” he continued, adding, “Doctors removed several pieces of shrapnel. After the surgery, they told me she might be able to walk in a week.”

His wife’s leg was broken, requiring pins to be inserted, and two other family members were also wounded in the strike, Qasoum stated.

Hayat Tahrir al-Sham (HTS), the armed group that controls Idlib, prevented the media from filming the damage at the scene, according to local sources. Local authorities associated with HTS also seized the Qasoum’s family car after the attack under the pretext of checking the car’s papers.

Meanwhile, local authorities have identified the man killed in the strike as a leader known as Musab Kinan, who was reportedly affiliated with Hurras al-Din, which is al-Qaeda’s arm in Idlib.

While some sources claimed that Kinan had been a student at a Turkish language institute in Idlib, others reported that he had been living in deep cover, a common tactic of al-Qaeda elements and leaders in northern Syria, where those in hiding wander around in dirty clothes, posing as construction workers or car mechanics to avoid US drones.

Members of Hurras al-Din have been US targets since the group was formed in 2017, when members of the Nusra Front, which at the time changed its name to Jabhat Fatah al-Sham, defected in Idlib.

Residents of Idlib told MEE that past US operations against the group were sometimes so accurate that they could hit a vehicle from one side and throw it across the street without disrupting traffic or leaving holes in the pavement.

Last month, however, a New York Times investigation revealed that in March 2019 US airstrikes on an Islamic State (IS) group stronghold in Baghour in eastern Syria resulted in the deaths of what is estimated to be at least 64 civilians.

In response to the New York Times report, the Pentagon launched a high-level investigation that will run for 90 days to review the attack and verify whether it will be deemed a war crime.

“We have reservations about the coalition’s investigations, considering that they have admitted to only 30 percent of the number of victims, none of whom have been compensated so far,” Fadel Abdul-Ghany, chairman and founder of the France-based Syrian Network for Human Rights (SNHR), told MEE.

“So far, there has been no compensation for civilians, homes that were demolished, or vital centres that were targeted,” he added.

Abdul-Ghany stated that 181 vital centres have been targeted during the US coalition’s operations.

“Victims must be compensated as soon as possible, and we hope that this will be done through an independent local committee, given that the delay, since 2014 until today, decreases the value of material and moral compensations,” he noted.

Last month, five civilians from the same family, including three children and one woman, were killed and six others wounded in Russian airstrikes that targeted a poultry farm housing displaced people on the outskirts of Maarat Misrin, north of Idlib.